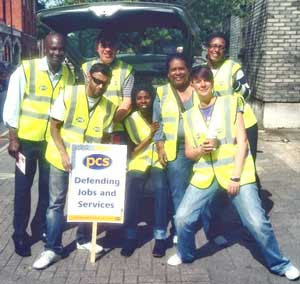 Some 750,000 public workers in Britain held the strongest one-day labor action in that country since the 1980s. A vicious attack upon the working class, as is going on in much of Europe and the United States, left the workers no choice but to take action June 30. In Britain, the government plans to cut public workers’ pensions and increase the retirement age.

The Public and Civil Service Union, the National Union of Teachers, the University and College Union and the Association of Teachers and Lecturers called the strike to protest the Conservative-Liberal regime’s plan to plunder public workers’ pensions.

The Treasury says it wants a deal with unions by November so that 50 percent higher contribution rates, smaller pensions and a later retirement age — 68 instead of 65 — can start to be introduced next April. The union leadership says no, and the membership voted overwhelmingly to strike. For the ATL it was its first national strike in 127 years, which indicates how even the most conservative sectors of the working class have been pushed to the wall.

The workers’ struggles in the news this spring and summer from Europe have mostly involved countries on the periphery of the continent. The economies of Greece, Spain, Portugal, Ireland and Iceland have suffered tremendously from the capitalist crisis. This has led to extremely high unemployment — 21 percent in Spain — and a nearly unpayable debt to the big banks in France and Germany.

These banks demand guaranteed payments from the peripheral countries. Though they are part of the Eurozone, these countries have been pushed into a position more like those in Asia and Latin America. Their governments follow orders from the European Central Bank, the European Union and the International Monetary Fund to cut social services and privatize all industries.

Britain’s sovereignty, in contrast, is not at stake. The British have their own currency, and their banks still suck interest payments from around the world. But the British ruling class, like the others, is squeezing all sectors of the workers at home as much as possible, just like in the U.S. Right now the British public sector workers have been targeted.

The government announced its austerity plan last year. This at first led to local anti-austerity demonstrations. Then at the end of 2010, students poured into the streets to fight against severe increases in tuition. Now public workers have joined the struggle.

The British corporate media continuously repeat the lies that public workers are “privileged” and should make “their share” of sacrifices. They try to drive a wedge between public sector and private sector workers. This is similar to what is happening in the United States, where teachers especially and other public workers have been under attack.

The unions say there was strong support for the June 30 strike, with, for example, 85 percent of the schools closed or disrupted and 85 colleges closed. Reports state that 30,000 workers marched in London, with thousands participating in marches in many other cities and towns.

Planning for the fall

The labor movement in Britain is discussing what steps to take next in this ongoing class struggle. The big question is whether or not this one-day action is a turning point in the labor movement, which had been gradually losing ground over the past 30 years.

In the 1970s, strikes were usual events in Britain, with worker-days on strike totaling 10 million in seven of the 10 years of that decade. Many strikes led to gains for the workers. In the early 1980s, the Margaret Thatcher government — in tandem with the Ronald Reagan administration in the U.S. — opened up an attack on organized labor coinciding with restructuring of the capitalist economy.

Thatcher’s attack defeated a miners’ strike and set back the labor movement for decades. The June 30 action is a break with labor passivity in the face of ruling class aggression. Already some of the union leaders have spoken of expanding the one-day strike into more extended actions in the fall.

Mark Serwotka, the general secretary of the Public and Civil Service Union, warned that the ranks of the strikers would grow to 4 million by autumn unless ministers backed down. Serotka said June 30 “delivered a message to the government. The workers will not tolerate this attack on their hard-earned pensions.” He also warned that the next step would be “much much bigger and will involve more unions.” (Independent, July 1)
at 6:24 PM