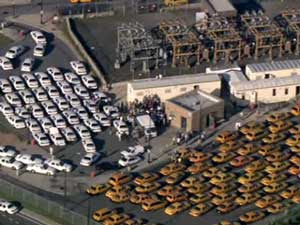 Ahmed Deraz was driving to the New Liberty Airport in Newark, N.J., on June 3 around 2:45 p.m. His driving angered Jersey City Police Lt. Pietro Veltre, who was driving an unmarked car with his spouse and infant child and who claims that Deraz cut him off on the Pulaski Skyway. Veltre followed Deraz for eight miles, until Deraz stopped at the airport.

Veltre then reached inside Deraz’s car, pulled his keys out, and shouted a slew of profanity and racist obscenities, including a call for Deraz to “go back to your [expletive] country.” (nj.com, June 3) Deraz says that after Veltre pushed him in the face, the cop arrested him for a list of offenses, including “assault on a police officer.” He was taken into custody. (myfoxny.com, June 3)

In response, 600 of Deraz’s fellow cab drivers went on strike. The New York Post reported that taxi service was not available at the busy international airport for five hours. The Newark Taxi Association made clear that it had no role in planning the action, which was initiated solely by the drivers.

One striking cab driver, Paulins Halaire, expressed his outrage, saying, “They don’t have any respect for us.” (nj.com, June 3) According to the Star-Ledger, police on the scene described the event as a near riot.

When Deraz was finally released, the taxi drivers celebrated, and at 8 p.m., cab service resumed. Deraz still faces charges from the incident.
Articles copyright 1995-2011 Workers World. Verbatim copying and distribution of this entire article is permitted in any medium without royalty provided this notice is preserved
at 8:30 PM