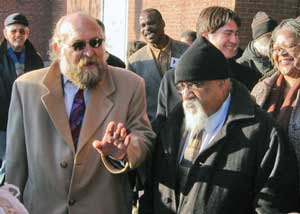 On May 19, people’s attorney and longtime movement ally Barry Wilson was sentenced to 90 days in the South Bay House of Correction in Boston for contempt of court. This outrageous sentence was in response to Wilson’s challenging racism and pro-law-enforcement bias in the jury selection process.

Wilson was defending a 22-year-old African-American man who was facing first-degree murder charges. Wilson had forcefully and passionately advocated for his client, objecting to the prosecutor’s consistent use of peremptory challenges to strike all African Americans from the jury.

After an African-American juror was challenged because her children had “experience with law enforcement,” the judge allowed a white, longtime Homeland Security veteran to be seated on May 5. Wilson strenuously objected and challenged Judge Patrick Brady on his reactionary, racist and pro-police bias.

Wilson has a long history of defending political activists, labor organizers, immigrants and oppressed people. He was lead counsel in the Plymouth 25, Marcus Jean and Amer Jubran cases; the first lawyer for the Boston School Bus Drivers, Steelworkers Local 8751, in the 1970s; counsel for framed African-American City Councilor Chuck Turner; and has participated in countless other cases. Wilson once did six months in federal prison for refusing to violate attorney-client privilege. This flagrantly reactionary repression — which comes from the same poisoned well that jailed people’s lawyer Lynne Stewart — is designed to send a threatening message to the progressive movement and to all defense lawyers who stand with it.

At a May 19 contempt hearing the courtroom was packed with supporters, including nearly every recognized progressive lawyer in the city as well as the family of the convicted young man, supporters of City Councilor Turner, Local 8751 members and International Action Center activists. Wilson’s law partner, Michelle Brennan, made numerous airtight legal arguments defending Wilson.

The judge’s outrageous, reactionary and vindictive behavior on the bench exposed him for the tool of the capitalist state that he is.

The highlight of the day was Wilson’s defiant statement to Judge Brady, who wanted Wilson to beg for mercy and identify “mitigating factors” to show his remorse. Wilson explained that the only mitigating factor was that he had to try his case in an atmosphere of racist, reactionary and pro-law-enforcement tyranny. He passionately defended his actions as the only responsible, ethical and appropriate conduct — in order to zealously and passionately advocate for his client and for oppressed people generally. He stated that in 2011 an African-American man cannot get a fair trial.

Wilson spent most of his statement continuing to advocate for his client, saying that his client was the real victim of the court’s unjust and unlawful conduct. A racist, pro-cop jury had found Wilson’s client guilty, despite the fact that there was no credible evidence to support this unjust verdict.

Wilson concluded by stating that in 37 years he has never backed down from giving 100 percent to his clients’ defense, particularly against racism and pro-cop bias, and pledged to continue regardless of the judge’s sentence.

Wilson is scheduled to begin his sentence on June 29. He plans on appealing this outrageous injustice.

At Local 8751’s monthly membership meeting on May 26, a strong resolution was passed supporting Wilson and recognizing his exemplary contributions to the struggle history of the union as well as his defense of movement militants and activists for more than 30 years.
Articles copyright 1995-2011 Workers World. Verbatim copying and distribution of this entire article is permitted in any medium without royalty provided this notice is preserved.
at 4:36 AM