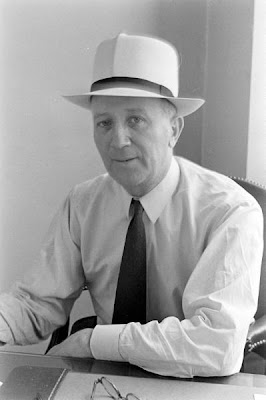 William Z. Foster was the American Communist Party's presidential candidate in 1924, 1928 and 1932. In 1928, he was nominated by 2,000 conventioneers in New York's Central Opera House. Part of the party's stated platform was the overthrow of capitalism in the U.S.

Foster was a working man's working man. Through the years he held jobs as a lumberman, longshoreman, chemical-worker, streetcar motorman, circus canvas man and deep-water sailor, among others. He was often fired because he tried to organize his co-workers, according to a UPI report, and he was often jailed because of his subversive activities.

When Foster died in 1961, he received a state funeral in the Soviet Union. It has been reported that his ashes are interred in Red Square beside those of fellow American communist John Reed. But according to Time magazine: "A niche had been prepared for Foster's urn in the Kremlin wall, Communism's Valhalla. But portly Elizabeth Gurley Flynn, an old comrade of Foster's who had flown over from the U.S. for the funeral, had other ideas. 'From you, dear comrades, we received his ashes,' she intoned at funeral's end, 'and we shall return them to our country for burial.'"
at 7:46 PM