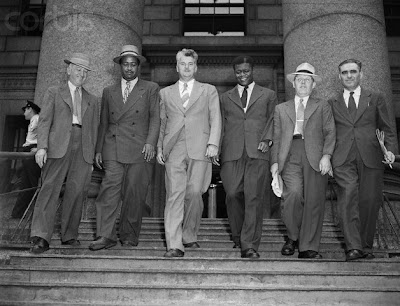 On the first Monday morning of June 1951, the U.S. Supreme Court issued a 22-page majority decision that, for the next six years, did the unfathomable here in the land of the free: It effectively outlawed a specific political belief. Sixty years later, that ruling stands as an object lesson in how the U.S. government should not react to stressful times by clamping down on the freedoms that define our democracy.

The case was Dennis v. United States, and it began with a bungled investigation into Soviet spy rings. Elizabeth Bentley, an American-born spy handler who had begun to fear her Soviet masters, had turned herself in to the FBI in Manhattan and named names. The Justice Department convened a special grand jury in New York, which spent months hearing secret testimony.

Because it was a secret investigation, the newspapers naturally were filled with stories about it. Reporters and columnists wrote breathlessly about what the jurors might be hearing and speculated about how many spies had burrowed into federal agencies. Unfortunately for the Justice Department, witnesses failed to confirm Bentley’s story (under oath, they either lied or took the 5th). As the grand jury investigation fizzled, Justice Department officials began looking for a way to save political face.

In the end, they decided to charge the overt leaders of the Communist Party U.S.A. with conspiring to advocate, or teach the necessity of, overthrowing the U.S. government — things explicitly outlawed under the Smith Act of 1940. Under the Smith Act, conviction did not require overt acts, just statements by the accused that they thought the U.S. government should be overthrown. Talk and belief, not deeds, were evidence of guilt.

The trial lasted a record nine months, with U.S. District Judge Harold Medina presiding. It quickly turned into a farce. Medina had made his bias against the defendants clear in pretrial hearings (he refused to allow the accused men to travel because, he said, it would give them a chance to carry out their conspiracy).

The defense team reacted badly to a flood of rulings against them, and arguments with Medina — occasionally bordering on the petulant — led to a flurry of contempt citations against all five. They included Richard Gladstein, the San Francisco attorney who also represented longshore union head Harry Bridges in landmark cases that successfully fought the U.S. government’s efforts to deport Bridges to his native Australia because of his suspected communist ties.

The Manhattan jury took just seven hours to convict the Communist Party U.S.A. leaders. Medina sentenced all but one to five years in prison; decorated World War II hero Robert G. Thompson received a three-year sentence. (One of the five was Gus Hall, a Youngstown area labor activist and, later, president of the Communist Party in the U.S. — Ed., Vindicator)

By the time the appeals reached the U.S. Supreme Court, a shooting war was underway between capitalism and communism on the Korean peninsula, and the justices voted 6 to 2 to uphold the convictions (Justice Tom C. Clark, father of future Attorney General Ramsey Clark, recused himself because he had been attorney general himself at the time of the Dennis trial.)

Writing for the majority, Chief Justice Fred M. Vinson — an old poker-playing pal of President Truman, whose administration pressed the case — ruled that the Communist Party U.S.A. leaders’ talk of revolution posed a “clear and present danger” to the United States, even though there was no evidence the defendants were planning, or had committed, any overt acts. The evidence was their libraries, their writings and the classes they taught.

But in dissent, Justice Hugo Black wrote words that should have been heeded then by the majority, and ought to be heeded today as American lawmakers and judges make fresh assaults on civil liberties in the name of fear, including the recently extended Patriot Act:

“Public opinion being what it now is, few will protest the conviction of these communist petitioners. There is hope, however, that in calmer times, when present pressures, passions and fears subside, this or some later court will restore the First Amendment liberties to the high preferred place where they belong in a free society.”

The ruling gave the U.S. government the green light to prosecute party leaders, and upward of 200 were indicted before the Smith Act was gutted in 1957 by the Warren court, which held in the related case Yates v. United States that words alone were not enough to pose a clear and present danger.

Sixty years later, in this era of Patriot Act-permitted warrantless searches, surreptitious surveys of library and bookstores users’ records, and extralegal rendition of terrorism suspects to secret interrogation sites, we would be wise to recognize that the rights we deny others out of fear, we eventually deny ourselves.

Scott Martelle is the author of “The Fear Within: Spies, Commies, and American Democracy on Trial.” He wrote this for the Los Angeles Times. Distributed by McClatchy-Tribune Information Services.
at 4:31 AM