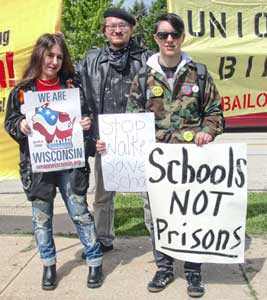 As a result of the ongoing people’s struggle in Wisconsin and worldwide support for it, a permanent injunction was issued by a Dane County judge May 26 that struck down the union-busting bill signed by Gov. Scott Walker on March 11.

Phil Neuenfeldt, president of the Wisconsin State AFL-CIO, stated: “Judge [Maryann] Sumi upheld what we knew [from] the beginning, that the law stripping hundreds of thousands of public employees of their rights was passed illegally, in the dead of the night through a back-door maneuver. The people have been clear from day one; they have stood together in the streets of Madison and in the streets around the state to express that this law is too extreme for Wisconsin. ... We hope that the Supreme Court will consider the careful review conducted by Judge Sumi and support her conclusion.” (http://wisaflcio.typepad.com/)

Sumi ruled that there is “clear and convincing” evidence that the state’s Open Meetings Law was violated. To pass a bill in what is known as a Joint Committee of Conference, 24-hours’ notice must be given to both state legislators and the public. This wasn’t done in the case of the anti-collective-bargaining bill.

On June 6 the Wisconsin State Supreme Court will hear oral arguments for and against taking the collective bargaining case. The court could decide to uphold Sumi’s decision and not take the case; take the case and keep the injunction in place while arguments are presented; or lift the injunction while the case is argued.

Although this is a temporary victory for poor and working people, the Wisconsin AFL-CIO warns that the fight is not over to defeat the anti-union bill. Gov. Walker and other right-wing politicians in the Wisconsin legislature — at the behest of the banks, corporations and the Pentagon — are intent on having the bill become law. Their next move will probably be an attempt to inject union-busting provisions into the 2011-13 state budget, which also includes billions of dollars in cuts.

Unions, community allies and student supporters are planning to pack the court on June 6, along with other protest actions statewide, to defeat the reactionary bill.

With the assistance of the Wisconsin AFL-CIO and other labor, community and student organizations, a statewide mobilization has gathered tens of thousands of signatures to set the stage for recall elections in July.

The state Government Accountability Board has voted unanimously to schedule recall elections on July 12 for six Republican legislators, all of whom voted for the union-busting bill signed by Gov. Walker. Challengers have until June 14 to gather 400 to 800 signatures to get on the ballot. The incumbents will automatically appear on the ballots.

In conjunction with the recall activity, protests continue statewide to defeat the union-busting bill and other attacks on poor and working people. On May 25 hundreds came out at the state Capitol in Madison to protest the signing of a racist voter identification bill by Walker.

The governor is being confronted wherever he goes in Wisconsin and beyond. For example, Jenna Pope of UWM (University of Wisconsin-Milwaukee) Occupied helped organize a protest against Walker at Banting Elementary School in Waukesha, a suburb just west of Milwaukee, on May 27.

When UWM Occupied heard that Walker was going to visit the school his niece attends to read to her class, a protest was immediately called. The action was posted on Facebook, which brought out people from the neighborhood to join the anti-Walker demonstration. Bail Out the People Movement and Workers World Party activists also attended. When Walker arrived, he was confronted with shouts of “Shame!” and “Coward!”

Pope stated: “We’re here to show Walker that he can’t go anywhere without us following him around. The people of Wisconsin are not happy with what he’s doing. No matter where he goes there’s going to be people there that disagree with what he’s doing. I think it’s funny that he’s going to an elementary school because he’s planning on making a lot of cuts to education, so I think it’s a perfect place to have a protest.”

A list of upcoming protest actions against the union-busting bill and other anti-people attacks in Wisconsin can be found at www.defendwisconsin.org.
at 4:39 AM