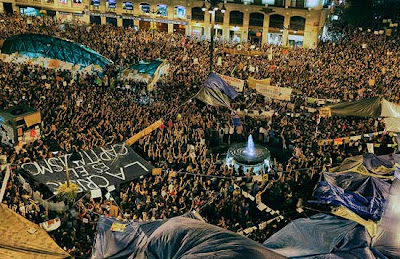 Drawing inspiration from the fighting spirit and determination of Tahrir Square and the peoples of Egypt, Tunisia and the Middle East, the peoples of Spain took the struggle against capitalist austerity, mass unemployment and the conditions of the economic crisis to a new level this past week.

Demonstrations and occupations of city plazas erupted across the Spanish state beginning on May 15 and, as of May 23, show no signs of faltering.

On May 15, a week before regional and local elections were to take place, protests started up in cities throughout the country against the government’s austerity program and mass unemployment, as well as to demand a number of democratic reforms of the political system.

The officially reported unemployment rate sits at a staggering 21.3 percent, the highest in Europe. For young people, the statistics are even worse, as 45 percent of people aged 18 to 25 are unemployed. The situation for youth is so dire that they are referred to as the “youth without a future” or “the lost generation.” Many have begun referring to themselves as “los indignados” (those who are “fed up”).

Tens of thousands were in the streets that day. Following the demonstration in Madrid, young people and workers took over and began an around-the-clock occupation of the central plaza there, the Puerta del Sol. This bold action inspired numerous other occupations of plazas in major cities throughout the country; people demonstrated in more than 166 cities during the week. At least 10 occupations of city squares were also being reported in Italy, and there was a protest outside the Spanish Embassy in Santo Domingo, the capital of the Dominican Republic.

While the capitalist-owned press has heavily focused on the role of social media in these demonstrations — and it is undeniable that those sites have been an important tool among many used by organizers — it is the objective conditions of the capitalist crisis, the austerity measures and anger over the bank bailouts that have driven masses of young people and workers into the streets throughout the Spanish state, from Galicia to the Basque Country to Catalonia, as well as in the capital city.

“I’m here against the system, against everything, the banks, the government, the Popular Party, unemployment. You name it. Nothing works,” journalism student Sabina Ortega told the Christian Science Monitor (May 20). “It’s against a two-party system. And my goal is to feel represented. I want politicians to know they are not listening. I’ll stay here as long as I have to.”

Despite a ban imposed on the occupations by the Spanish government on May 20, two days ahead of the scheduled elections, tens of thousands of people in Puerta del Sol and elsewhere around the country defied these orders and continued to hold the encampments. Some plan to stay until the following weekend.

Aerial photos of the Puerta del Sol in Madrid show a number of large banners that were raised in the square. One of the most prominent reads, “La crisis es el capitalismo” (“The crisis is capitalism”). Tents and other structures — offering medical, legal and food services — have been established and demonstrators have constituted various assemblies to carry out the many tasks required to maintain the occupation and to vote on different political objectives.

Many of the different communist parties and organizations active in the Spanish state have issued statements of support for the wave of occupations, dubbed the 15-M (May 15) movement, and have been active participants in these demonstrations. They view their main tasks as helping to develop and deepen the working-class consciousness of the protests and to unite the various sectors that are in motion against the capitalist austerity in order to open a broader, worker-led political struggle against the Spanish state and the two ruling parties — the Spanish Socialist Workers Party (PSOE) and the People’s Party (PP).

In the elections held May 22, the governing PSOE was dealt a defeat by the PP, even in strongholds the self-styled socialists have held since the end of Franco’s fascist dictatorial rule in the mid-1970s, at which time a number of democratic reforms were introduced.

Despite what its name might suggest, the PSOE is a historically social democratic party that currently occupies a position similar to the one the Democratic Party holds here in the U.S. At its congress back in 1979, the PSOE renounced Marxism and the revolutionary struggle of the working class and is now one of the two main capitalist parties in the country.

The other, the People’s Party (PP), is a right-wing party formed in 1989 as a result of the merger of various reactionary parties. Many in the leadership of the PP have connections going back to the Franco regime, with some even having served under him during the fascist rule over the country from 1940 to 1975.

Spain has the world’s twelfth-largest economy. Spain also has the European Union’s third-largest budget deficit and may, like Ireland, Greece and Portugal, be forced to accept a devastating IMF austerity package if it cannot satisfy the banks with its own austerity measures soon.

Within the Galician, Basque and Catalonian regions of the Spanish state there are movements for national self-determination.

Of the three main countrywide trade union federations, only one, the CGT, has continued to wage an open struggle against the state around the austerity programs. The other two federations — the UGT and the Workers’ Commissions (CCOO) — granted concessions to the PSOE government following the country’s first general strike in more than 10 years last Sept. 29 and agreed to stop future mass actions of workers. Most regional unions in the Basque Country, however, support the workers’ struggles.

Although the current demonstrations began one week prior to elections, this revolt is directed not merely against one capitalist party or the other, but is an uprising against the miserable conditions that have been forced upon young people and workers by capitalism and the global crisis, which is now four years old.

The workers, the unemployed and the young people of the Spanish state are following the heroic example of the peoples of Egypt, Tunisia and elsewhere throughout North Africa and the Middle East as they take their destiny into their own hands and fight back.

The May 22 elections came and went, but the occupation shows no signs of giving up. Organizers have continued to hold the encampments in Madrid and elsewhere throughout the country and have set May 28 as another major day of demonstrations.
Articles copyright 1995-2011 Workers World. Verbatim copying and distribution of this entire article is permitted in any medium without royalty provided this notice is preserved.
at 2:35 AM