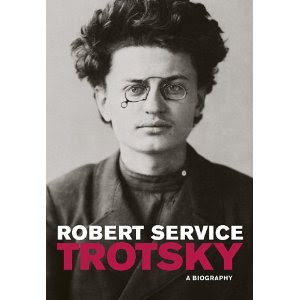 
For the longest time, Trotsky's criticisms of the USSR were held up by capitalists as "proof" of Soviet evil. Trotsky's critiques of Stalin's bureaucratism were seen as signs that the USSR was "a brutal dictatorship."

Even though Trotsky called for "unconditional defense" of the USSR, and maintained it was a "worker's state" until his death, the propaganda of the capitalist media used him as a battering ram against Communism, despite his intentions. Even now, countless young radicals use "Trotskyism" as an excuse not to defend the USSR and other socialist states.

However, now that the USSR is gone, Trotsky is up for grabs as well. This may be related to the fact that Hugo Chavez, a leader of the Revolutionary Bolivarian Republic of Venezuela quotes Trotsky left and right, and has done his best to enact the concept of "Permanent Revolution."

So, Trotsky is now "under the bus" from the same historian whose made a career writing shoddy books with bad research about Stalin. Robert Service, a "respect historian" who teaches at Oxford University and his held up by the capitalists as an "expert" on Russian history has spit out an anti-Communist text. Like his other "masterpieces" this one has logical and factual errors that put any 5th graders history report to shame, even if they are using the recently established Texas textbooks as a source.

This book is loaded with plain factual errors.

Trotsky's first son was named Lev, not Sergei. Its usually good for biographers to get the name of the first son of the person they write about correctly. Its a minimum expectation, especially from an Oxford University "historian" like Service. If I opened a biography of Abraham Lincoln that said his first son was named Leonardo, I would give it equal credibility to Service's work. However, the capitalist media does not hold the same standards.

Stalin didn't order the Shanghia insurrection of 1927, he contrarily ordered it to surrender. Stalin made the Chinese Communist Party dissolve into the Nationalist Party. The entire point of Trotsky's writings are defense of the Shanghia Commune and the Chinese Worker's Revolt, and criticism of Stalin for undermining the Chinese Communists by sabotaging their efforts for his own, short term gains. Has Service ever read any of Trotsky's writings on China?

He doesn't seem to understand their entire thesis. I wonder if the Oxford Library has a copy? Perhaps Mr. Service has never heard of the Marxist Internet Archive.

Trotsky's secretary Bernard Wolfe, was of no relation to Bertram Wolfe, the U.S. Communist leader. Bertram left the Communist Party in the USA with Jay Lovestone's "right opposition" in 1930. The Trotskyists left with James Cannon's "Left Opposition" in 1928.

Bernard Wolfe was of no relation to U.S. Marxist politics, and definitely not the same person as "Bertram Wolfe" a U.S. right opposition leader of the Communist Party.

What kind of historian makes these kinds of huge errors? Has Service ever read any of Trotsky's writings?

This lame attempt at demonizing Trotsky is sad. What's wrong with Trotsky, according to Service?

He's a "self-hating jew" because he tried to hide is Jewish heritage in Czarist Russia. The pogroms by the Czars government, and frequent hate crimes by the Black Hundreds Party might have a bit more to do with it than "self-hatred." Even after the revolution, Trotsky was the victim of Anti-semitism in the world press. Trotsky lived under and helped overthrow the very government that first wrote and published "The Protocols of the Elders of Zion."

Would Service call Jewish people attempting to flee Nazi Germany with false papers "self-hating"? Good night! What was Trotsky, a Communist atheist of Jewish heritage expected to do? Is this anything close to a fair criticism?

Trotsky was involved in the suppression of the Left-Socialist Revolutionaries? Yes, that is true.

Why? Because the Left-Socialist Revolutionaries shot Lenin, the President of the USSR, nearly killing him.

Is it immoral to attempt to arrest a clandestine political group that shoots heads of state? Does Mr. Service feel that the J. Edgar Hoover should be condemned for "suppressing" Lee Harvey Oswald? Was it "Red Terror" when Sara Jane Moore was sent to jail for shooting Gerald Ford?

Robert Service's latest hit is another episode to add to the list of anti-Communist self-exposures.

Yes, next time somebody tells me Fidel Castro is an evil dictator, I will say "Yeah, and Trotsky's first son was named Sergei, right?"

The next time somebody says Mao killed millions of people, I'll say "Yep, and Stalin order the 1927 Chinese insurrection, what a blunder!"

This book is just another reason to see that anti-Communism is as discredited as the flat earth theory and faith healing. The problem is just that the ruling class that owns the media, controls the universities, and has the ability to promote such "scholarship" is willing to promote the ideas of clowns like Robert Service, because Socialism is their enemy. Socialism means that for once there is public control of the industries, the economy, and the media. It means no more will a small elite be able to dictate over the rest of humanity, and that the horrors of unemployment, poverty, starvation, and war will be no more.

Robert Service should at least consider getting a good secretary do to his research before attempting to write such slanderous attacks. He should also be careful not to confuse his secretary with 1930s U.S. Marxists, EVEN IF THEY HAVE SIMILAR NAMES!
at 2:27 AM