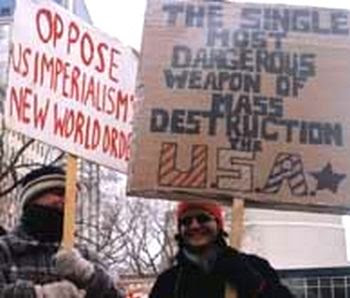 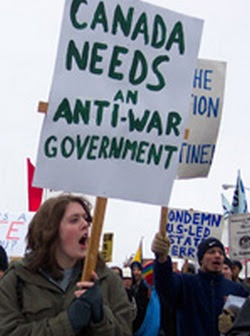 Hiroshima and Nagasaki: Never Again!
One Humanity, One Struggle!
Fight for an Anti-War Government!
- Communist Party of Canada (Marxist-Leninist) -

This year, we mark the 65th anniversary of the dropping of atomic bombs on the Japanese cities of Hiroshima and Nagasaki on August 6 and 9, 1945 respectively. The atomic bomb that the United States dropped on Hiroshima killed about 140,000 people in the initial blast, in total more than 237,000. Three days later, the bomb it dropped on Nagasaki killed 8,500 people instantly and eventually resulted in the deaths of more than 70,000 people due to exposure to radiation and other injuries.

On this occasion, CPC(M-L) pays its deepest respects to the victims of Hiroshima and Nagasaki and their families and to all peoples the world over who have suffered and continue to suffer as a result of the crimes of the U.S. imperialists since World War Two.

The dropping of atomic bombs on Hiroshima and Nagasaki was aimed at threatening the world's people who had emerged from the Second World War as a force for liberation and emancipation. It served notice that the United States would commit any crime in order to establish its hegemony over Europe, dominate Asia and defeat communism. As part of Anglo-American imperialism, the Canadian government was directly involved in facilitating the production of the atomic bomb, including amongst other things by providing enriched uranium. Canadian cabinet ministers knew in advance the bomb would be used on the Japanese people.

August 6 and 9 have now become days to commemorate those who were killed in these horrendous crimes and to express the determination of Canadians and the peoples of the world to never again permit such crimes against humanity.

The lessons of history learned from the tragic events organized against the Japanese people 65 years ago are all the more pertinent today at a time the United States is once again threatening countries such as the Democratic People's Republic of Korea and Iran with nuclear holocaust. It is criminal that those who used nuclear weapons in the past on an already defeated foe in order to blackmail the entire world's people, today threaten the use of nuclear pre-emptive strikes under the pretext of acting in the interests of "peace," "national security," "human security" and "democracy."

Humanity's fight to rid the world of nuclear weapons and defeat the U.S. imperialists' "new world order" requires stepping up the struggle to uphold the sovereignty and independence of all nations big and small, and the elimination of the threat or use of force to settle conflicts between nations. It also necessitates that the Canadian working class and people put in place an anti-war government that rejects the use of force as a means of settling conflicts between nations and peoples, withdraws from all aggressive military blocs and treaties such as NATO, NORAD and the integrated U.S. Command and demands that all nuclear states dismantle their respective nuclear arsenals, beginning with the United States and other big powers.

Hiroshima and Nagasaki: Never Again!
One Humanity, One Struggle!
Fight for an Anti-War Government!