Celebrating the Life of a Warrior Queen 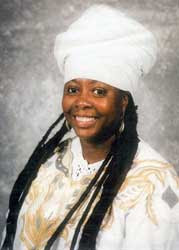 The rhythmic sound of African drums filled the air and brought hundreds of mourners into harmony in tribute to Sister Njere Alghanee, first on July 2 at the Tupac Shakur Center for the Arts and then at many home-going celebrations on July 3.

A respected leader of the reparations movement in the U.S., Alghanee had served in several capacities for NCOBRA, the National Coalition of Blacks for Reparations in America, and was a national co-chair at the time of her death.

Alghanee died in a tragic car accident in Atlanta on June 24, when the car she was riding in lost power on the interstate and was hit by an 18-wheeler. It was her 58th birthday. Her son, Biko, suffered broken bones.

She had left the U.S. Social Forum in Detroit on that day to return home to Atlanta so she could prepare to leave for the NCOBRA conference in New Orleans the next morning.

Alghanee’s life was dedicated to the liberation of African peoples. As a teenager in Indianapolis she joined the Black Panther Party and continued her activism as a student at Wayne State University in Detroit.

She became a citizen of The Republic of New Africa and was a vocal supporter of African liberation struggles in Zimbabwe, Angola, Namibia and South Africa. Detroit was a center of revolutionary Black political activism, and she established relationships with many who are today leaders of such organizations as the Malcolm X Grassroots Movement and The Republic of New Africa, as well as elected officials in Detroit and Mississippi.

Among Alghanee’s many areas of work was her unceasing concern for the many political prisoners who have now spent decades in prisons as a result of their stands against racism and police terror.

With degrees in mass communications and early childhood education, Alghanee held executive positions at the Georgia Citizen’s Coalition on Hunger and the Georgia Advocates for Battered Women and Children. She also devoted considerable energy to Disabled in Action, consistently including the struggle of this marginalized community in the overall liberation agenda. Several schools, community arts centers, youth programs and women’s organizations credit Alghanee’s vision and skills for their creation and continued success.

Known as Sister Courage on her weekly radio show on WRFG 89.3 FM, Atlanta’s progressive community station, Alghanee created a space for the issues of reparations, racism, political prisoners and grassroots organizing to be analyzed and discussed.

Mama Njere, as she was affectionately called, had six children and was the proud grandmother of three.

Dozens of laudatory tributes brought applause, tears and laughter to the many hundreds of family members, fellow activists and community supporters who traveled from across the U.S. to honor the contributions of this warrior for the people.

When speakers recalled her radiant smile and steady personality, unfailing love for justice for all those oppressed and exploited, dedication to the liberation of African people, and optimistic and hopeful spirit, all present knew just what they were talking about.

From the national and local leadership of NCOBRA to the co-hosts of her radio program, “What Good Is a Song,” all declared that the life’s work of Sister Njere would go forward.

Articles copyright 1995-2010 Workers World. Verbatim copying and distribution of this entire article is permitted in any medium without royalty provided this notice is preserved.
at 2:04 AM