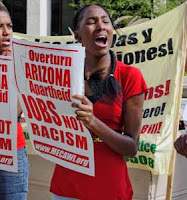 Workers and oppressed peoples in the U.S. are responding to the escalating racism and political repression that is taking place amid the worst economic crisis since the Great Depression. Even during an election year, where the corporate media are dominated by competition between candidates of the two ruling class parties — which do not in most cases address the underlying causes of the mounting social problems facing the majority of the population — various organizations and movements have come out into the streets to engage in demonstrations and civil disobedience.

On July 29 thousands across the country demonstrated against the enactment of Arizona’s racial profiling law SB 1070. In Phoenix and throughout Arizona more than 500 people were arrested for defying police who attempted to suppress protests aimed at overturning this draconian statute.

In California’s Bay Area, demonstrations took place which not only expressed solidarity with the immigrant communities in Arizona, but also opposed the so-called “Secure Communities” federal program, which identifies immigrants for criminal prosecution and deportation. According to government records, some 400,000 people have been fingered by the program and handed over to the Immigration and Customs Enforcement.

Last year the Obama administration set a record number for deportations of immigrants with a reported total of 387,790 people. The numbers for 2010 are expected to surpass those of 2009.

The Secure Communities program provides for detainees at county jails to be fingerprinted and their records immediately sent to a federal immigration database. The July 29 Mercury News pointed out that “The program targets what the government calls criminal aliens, who are immigrants — legally or illegally in the country — who can be deported because of crimes they have committed.”

This same article notes: “Last year, 35 percent of those deported had a crime on their record. This year, about half of those deported were convicted of a crime.” Despite attempts by right-wing political forces and law-enforcement agencies to label the immigrant communities, both undocumented and documented as criminals, statistics indicate that the majority of those who are targeted for detention and deportation do not have outstanding criminal charges and convictions. Even with these criminal convictions, the inherent racist character of the U.S. legal system typically results in many more people of color being subjected to targeted prosecutions and disparate sentencing by the courts.

Even though the corporate media, the Obama administration and spokespeople for capitalist interests have continued to falsely claim that an economic recovery is underway, statistics indicate that joblessness, home foreclosures and cutbacks in public services and education are continuing. In addition, there is a widening gap in income and wealth between whites and people of color.

Although there has been unequal income and wealth between men and women as a whole in U.S. society, the character of national oppression coupled with the economic crisis has magnified the differences along racial lines. In a recent article Christine Bork writes, “The result of this racial segregation of poverty is stark — 29 percent of households headed by white women with children live in poverty compared to 43 percent of African-American women and 46 percent of Latina women.” (Huffington Post, July 30)

Bork points out, “Factors such as industry sector, wage growth, access to health care benefits, and even zip code contribute to a woman of color’s ability to accumulate enough to support her family. Without critical wealth and/or asset-building opportunities, families of color are relegated to living paycheck to paycheck, edging one step closer to financial ruin when they encounter job loss or an illness.”

Such income and wealth inequalities require a struggle against gender, national and class oppression. These issues are not even addressed seriously by either the Democratic or Republican parties. Consequently, independent political action is needed based on a program designed to overturn inequalities based on gender, race and class origins.

Bork concludes her article by stating, “Wealth and poverty both accumulate over time, growing exponentially with each passing generation.” Even the Brookings Institute, Bork notes, said in a recent study that “white children are more likely to surpass their parents’ income than black children at a similar point in the income distribution.”

This income difference based on race is compounded by the fact that “In the United States, the top 10 percent own approximately 76 percent of all wealth; under this structure, the children of wealth will continue building and accumulating it, while the children of those who are unable to accumulate wealth will likewise grow poorer.” (Huffington Post, July 30)

The United Auto Workers and the Rainbow/Push Coalition issued a call for a demonstration in downtown Detroit on Aug. 28 to demand jobs, justice and peace.

The UAW states in a July 9 press release: “This campaign will call on our national leaders to 1. Rebuild America by enacting industrial and trade policies that will create jobs, encourage manufacturing in America and put workers first; and 2. Enforce the law regarding workers’ rights, civil rights, industrial regulation and the creation of fair and just educational, economic, and health policies; and finally 3. End the ongoing wars in the Middle East and redirect the war budget to rebuilding America.” (uaw.org)

Rainbow/Push Coalition says in relations to the Aug. 28 mobilization that “No group has suffered more from America’s economic meltdown than working men and women. The auto industry was decimated and workers paid the price.” (rainbowpush.org)

The coalition also notes that “Poverty is on the rise. Home and church foreclosures continue to mount and student loan defaults are increasing. Cities are under siege. Public transportation services are cut, workers laid off, but fares go up. Teachers are laid off and programs are cut as education budgets are slashed.”

In Detroit the Moratorium NOW! Coalition and Michigan Emergency Committee Against War and Injustice will work to build the Aug. 28 demonstration by stressing the urgency of both labor and the community to forge a working alliance aimed at advancing the struggle to win jobs, housing, quality education, workers’ rights, an end to police terrorism and the acquisition of healthcare benefits for all.

The Detroit demonstration will build momentum for a national mobilization scheduled for Oct. 2 in Washington, D.C. The One Nation coalition, the main initiator, is made up of several organizations, including the National Council of La Raza, the Service Employees union, the NAACP, the AFL-CIO and the United States Student Association.

According to Paul Starr, a professor of public affairs at Princeton University and co-editor of American Prospect magazine, “There is no choice but for these groups to get together. The historical pattern is that voter turnout falls disproportionately among minorities and young people at these midterm elections, so they are fighting a historical trend.” (Washington Post, July 11)

These efforts made by leading labor and civil rights organizations reflect the growing pressure from their constituencies to address the concrete conditions faced by people in the United States. Yet it is important that grassroots organizations emphasize the need for independent political action and specific demands related to immigrant rights, an end to police brutality and political repression, and a real jobs program that will put the 34 million unemployed and underemployed back to work with decent wages and benefits.

The One Nation coalition should also endorse the Oct. 7 National Day of Action to Defend Education, which is a follow-up to the successful protests on March 4 that mobilized hundreds of thousands of students and educational workers.

The writer is the editor of Pan-African News Wire.
at 5:44 AM

Nice post and this post helped me alot in my college assignement. Thanks you as your information.