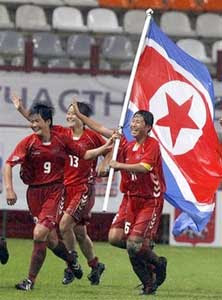 The women’s soccer team from the Democratic People’s Republic of Korea got a heroes’ welcome when they arrived home in Pyongyang on Sept. 7. Over 100,000 people lined the streets of North Korea’s capital to cheer the winners of the FIFA U-20 Women’s World Championship.

The last game in the FIFA 2006 finals, played in Moscow, had been between the DPRK and China. The Korean women won handily, 5 to 0. The two Asian teams dominated the sport this year. In third and fourth place, respec t ively, were Brazil and the U.S.

The Korean women’s victory was all the more remarkable considering that they represent a country of only 25 million people that competed against others many times its size.

Nothing about this victory has appeared in the U.S. media so far, which generally devotes much space and time to sports and ordinarily would be interested in a story about such a remarkable upset. But when it comes to news about North Korea, the reporting is almost universally hostile.

Most people in the U.S. would probably be shocked to find out that the DPRK produces strong, healthy athletes—including women. They’ve been told again and again by the propaganda machine that the people of North Korea are starving, stunted, down trodden and would give anything for a chance to defect.

No wonder news about this sports feat didn’t make it into the corporate press. It contradicts all the lies told about the DPRK.

Articles copyright 1995-2010 Workers World. Verbatim copying and distribution of this entire article is permitted in any medium without royalty provided this notice is preserved.
at 2:03 AM