TMLD: The Law of the Jungle, U.S. Steel 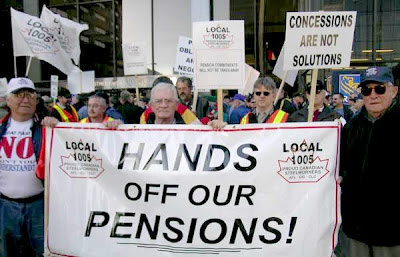 From: The Marxist-Leninist Daily, from Canada.

U.S. Steel says the downturn in the business cycle forced it to break its contract with the government of Canada on employment and production levels. It also says the crisis forced it to break its sworn word that it would protect and not harm pensions of Canadian steelworkers. What kind of gangster logic is this? If business contracts and collective agreements and the word of people in authority are to be dependent on the business cycle always going up and never going down, then not a single business contract under commercial law would be valid and worthy of the paper is was printed on. Commercial law itself would be meaningless as every agreement would be declared invalid as it could be broken as soon as the business cycle begins its inevitable dip.

No one could ever again believe the word and signature of business people in authority. It would be the law of the Chicago jungle with gangsters in control through guns and intimidation and the rule of crooked politicians. Clearly, this is the world that global monopolies such as U.S. Steel and Vale Inco want to bring into Canada. Canadians don't like or want it!

A modern society cannot permit gangsters and liars to break business contracts or renege on their word on the basis of invoking their own egocentric "law of the downturn." Their "law of the downturn" in the business cycle cannot be permitted to override contracts with the federal government, the sworn public law and established Canadian norms, standard of living and workers' collective agreements negotiated over decades during which time the workers did their duty toward society by producing its social wealth.

This is unacceptable behaviour. Canadians have not built this country to be torn apart by global monopolies that bring their gangster logic into Canada, or that of their apologists who declare that workers have to accept their dictate because today "economies have no borders." Such criminal disregard for Canadian law cannot be permitted. It is time that governments at all levels settle scores with this gangster logic before its infects the entire body politic with its diseased way of doing business and its corrupt and dishonest morality. Workers are doing their part through active resistance. Where are the Canadian governments and politicians that are supposed to defend the well-being and security of Canadians by enforcing public right?
at 6:04 PM