The memory of Fannie Lou Hamer is inspiring Black and Latino/a activists throughout New York state to build the new Freedom Party.

“We are asserting our right to self-determination, our right to continue the history of that great woman — Fannie Lou Hamer — who was beaten to a pulp trying to get some parity and inclusion for Black people in the Democratic Party,” declared Barron at a June 17 news conference held at Sistas’ Place in Brooklyn’s Bedford-Stuyvesant community. There, he announced the forming of the Freedom Party and kicked off its election campaign. 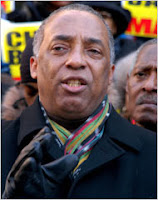 Hamer protested the seating of an all-white Mississippi delegation at the 1964 Democratic National Convention in Atlantic City. The delegates included sheriffs who had tortured civil rights activists.

Forty-six years later, New York’s Democratic Party is running an all-white slate of candidates. Yet the state has 3 million African-American residents, as well as 3 million Latinos/as, 1 million Asian Americans, and more than 50,000 Native people whose land was stolen.

The state’s Democratic Party dumped Gov. David Paterson — one of only four Black governors in U.S. history — to make way for state Attorney General Andrew Cuomo to run as their gubernatorial candidate.

Cuomo’s main qualification for governor is being the son of three-term Gov. Mario Cuomo. As Barron pointed out, Mario Cuomo built more prisons than had any governor in New York history.

Andrew Cuomo picked Rochester mayor and former police chief Robert Duffy as his running mate. Duffy’s “zero-tolerance” arrest policy targeted African-American and Latino/a people. Cuomo’s selection of Duffy for lieutenant governor is a blatant appeal to the white racist vote. It’s a slap in the face to people of color.

Why the wealthy hate Charles Barron

Barron represents the East New York section of Brooklyn, one of the poorest sections in the city. He fights for poor people all over the earth.

Barron has spoken countless times at anti-war demonstrations. He’s spoken at immigrant rights’ rallies, including the huge May 1, 2006, rally in New York City’s Union Square. Barron is at the forefront of the movement for reparations for African-American people.

In 2009 Barron helped lead the Viva Palestina caravan that brought aid to the Gaza Ghetto. He spoke at Brooklyn’s House of the Lord Church on June 17 in defense of the Freedom Flotilla to Gaza that Israeli pirates murderously attacked.

Democratic Party mouthpieces, including New York City Council Speaker Christine Quinn, denounced the June 17 rally, which was held in a Black church, and demanded an investigation of its speakers.

In 2006 Quinn rearranged the seating of the City Council so that Barron would have to sit under a statue of slave owner and rapist Thomas Jefferson. In addition, in 2009, she removed Barron as the chair of the Higher Education Committee.

Billionaires have never forgiven Charles Barron for inviting Zimbabwe’s President Robert Mugabe to City Hall in 2002. Mugabe helped liberate Zimbabwe and has turned over thousands of white-owned farms to Black people. That should have happened in the U.S. following the Civil War.

Barron’s slate: fighters for the oppressed

Eva Doyle is well known in Buffalo, N.Y., as an outstanding teacher who fought for the inclusion of African-American history in the school curriculum. Since 1979 she’s written the “Eye on History” newspaper column, now in the Black Criterion, the oldest Black newspaper in western New York.

Ramon Jimenez grew up across the street from Malcolm X’s home in East Elmhurst, Queens. A graduate of Harvard Law School, Jimenez has fought for tenants in the South Bronx and was arrested for demanding that Hostos College — the only bilingual college in the U.S. — be kept open. Jimenez is currently defending Black and Latino/a workers at Woodlawn Cemetery who’ve had racist epithets hurled at them by management.

Barron, Doyle and Jimenez spoke at a July 11 rally held at Siloam Presbyterian Church in Bedford-Stuyvesant. So did Assemblywoman Inez Barron, life-partner of Charles Barron; Viola Plummer of the December 12th Movement; and “Attorney-at-War” Alton Maddox, who for 20 years has been suspended from practicing law because of his courageous defense of Tawana Brawley. (In 1987 Brawley, who is African American and was then 15 years old, charged that six white men, including police officers, had raped her. The racist establishment media and New York state officials came down hard on her and her family and punished her attorneys.)

Mario Cuomo was governor of New York state when the cover-up of Brawley’s rape took place. In 2007 Brawley’s family asked state Attorney General Andrew Cuomo to reopen the case and unseal the files. Nothing has been heard since.

Put Freedom Party on the ballot

Simple justice demands that every activist should support the Freedom Party. The Democratic Party’s all-white slate is a capitulation to the Tea Party bigots.

By running an African-American man, an African-American woman and a Puerto Rican man on its ticket, the Freedom Party stands for equality. It reaffirms the “Great Alliance” of the Latino/a and Black communities that built the Local 1199 hospital workers’ union (now affiliated with the Service Employees) and won “open admissions” at the City University of New York.

The Freedom Party is a break from the imperialist Democratic Party that politically strangles poor and working people. Top labor leaders avoid any real struggle against unemployment by pouring union money into Democratic congressional candidate coffers.

“We’re the only party that’s going to raise police terror,” declared Barron at the July 11 rally. He asked how the cops could justify firing 50 shots at Sean Bell and 41 shots at Amadou Diallo, killing both unarmed men.

Barron called for freeing all political prisoners. He demanded reparations for African Americans and the right of Black people to return to New Orleans. He denounced the idea of any budget cutbacks since Wall Street made $61 billion in profits last year.

The Freedom Party needs 15,000 signatures just to get on the ballot. Because of technical requirements, it actually needs at least double that amount. The campaign needs volunteers and donations.

Contact the Freedom Party at 347-636-3660 to see how you can help.
Articles copyright 1995-2010 Workers World. Verbatim copying and distribution of this entire article is permitted in any medium without royalty provided this notice is preserved.
at 7:09 PM

I would like to exchange links with your site www.blogger.com
Is this possible?