Struggle Against Racist Resegregation Heats Up In North Carolina 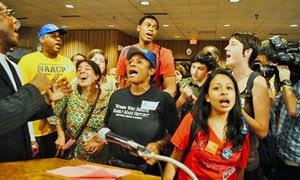 July 20 began with a mass demonstration to stop the racist attempts to resegregate the schools in Wake County, North Carolina, and ended with the arrest of 19 people at the school board meeting later that afternoon.

Nearly 2,000 demonstrators filled the streets of downtown Raleigh on the morning of July 20 for a march called by the North Carolina chapter of the NAACP and endorsed by the national AME Zion Church. The church was holding its national convention in Raleigh July 16-21 at the Raleigh Convention Center. The church also recently cancelled their winter meeting scheduled for Arizona in solidarity with the boycott called against the racist, anti-immigrant SB 1070.

Members of the faith community played a pivotal role in the demonstration. In particular Black churches from across the state mobilized many members of their congregations, along with a number of chapters of the NAACP, civil rights activists, community organizations and high school students.

The spirited march began at the Convention Center, streamed through downtown Raleigh, as chants of “Forward ever, backwards never!” filled the air, and ended with a rally at the State Capitol building. There, high school students; AME Zion Church bishops; Rev. William Barber, president of the state NAACP; MaryBe McMillan, secretary-treasurer of the state AFL-CIO; and many others spoke out against the attempts of the “Resegregationist Five.” These five members of the nine-person school board want to create a two-tiered system of education and send our schools back into the era of Jim Crow segregation. All the speakers urged participants of the march to attend the school board meeting later in the afternoon.

The scene at the school board meeting resembled a prison more than a public meeting. Metal barricades lined the sidewalks outside of the central offices of the Wake County Public School System. Two beige prison transfer buses waited behind the building in anticipation of mass arrests; cops on horses stood guard in the parking lot, as nearly ten bike cops wove around the building. At least 40 uniformed cops patrolled inside and outside the building, including the chief of the Raleigh Police Department.

Rev. Barber, along with Rev. Nancy Petty, senior pastor at Pullen Memorial Baptist Church in Raleigh — two of the four people arrested in an act of civil disobeidence at the school board meeting on June 15 — had earlier declared their intention to attend the meeting on July 20 in direct defiance of being banned from school property as a result of their June arrest.

A demonstration of nearly 150 people began as the two made their way onto the grounds of the central office, and the crowd flanked behind them as a line of cops and media approached. Rev. Barber read an open letter they had written to board chair Ron Margiotta and the rest of the Resegregationist Five opposing their plans to segregate the schools and protesting their ban from school property. Reverends Barber and Petty were then arrested after declaring their intention to enter the meeting, along with Rev. Gregory Moss, president of the North Carolina General Baptist State Convention.

The rally continued outside the meeting following the arrests, as tensions between the

cops and demonstrators became sharper. After a nearly 30-minute standoff, a new plan was developed and people made their way into the building to attend the meeting. As the public comment section opened around 4 p.m., a number of community members spoke out against the attempts of the Five to resegregate the schools.

The occasional GOP-planted “supporter” of the Five sang the praises of the board for, among other things, carrying out $25 million in budget cuts to the school system and “putting an end to forced busing,” recalling the rhetoric of segregationist and white supremacist Gov. George Wallace of Alabama.

Refusing to be silent

Near the end of the public comment period, as the two-minute speaking limit ran out for Rev. Michelle Cotton Laws, president of the Chapel Hill-Carrboro chapter of the NAACP, she refused to give up the podium. She was joined by nearly 30 members of the audience as chants of “Forward ever, backwards never!” filled the room.

Members of the NAACP, student activists and religious leaders linked arms at the podium and continued chanting and singing civil rights songs as the board went into recess because the meeting had been taken over. Nearly two dozen cops, who had been lining the board meeting room, moved to the front to break up the demonstration.

Sixteen people were arrested, ranging in age from 16 to 60, including NAACP members; a high school student; youth members of NC Heroes Emerging Amongst Teens and Raleigh Fight Imperialism, Stand Together; Keith Rivers, a Black city councilperson from Elizabeth City; and religious leaders from around North Carolina.

As the arrests were taking place, Keith Sutton, the only African-American member of the school board, came over to the confrontation to make sure that demonstrators were being treated fairly by the cops. However, he was attacked by three cops, who twisted his arms behind his back as if to arrest him. He has demanded an apology from the Raleigh Police Department.

Nearly two dozen people who had been in the two overflow rooms on the fourth floor made their way down to the board meeting room during the demonstration. They demanded access to the meeting room, and when the cops closed and locked the doors, they began chanting “What do we want? Justice! When do we want it? Now!”

A crowd of supporters greeted the 16 who were arrested on charges of second-degree trespassing and disorderly conduct as they were released from jail later that evening. The three arrested earlier in the day had already been released, bringing the total number of arrests to 19.

The actions on July 20 were an important step forward for the movement to stop the attempts to resegregate the schools in Wake County. The powerful unity forged between civil rights activists, the faith community, youth and students, and other community organizations signals a new stage in this struggle, which shows no signs of lessening anytime soon. Everyday, more and more people are drawn into this struggle, and if July 20 was any indication, this community fightback will continue to grow over the coming weeks and months.

The writer is a Raleigh FIST organizer who participated in the July 20 march.
Articles copyright 1995-2010 Workers World. Verbatim copying and distribution of this entire article is permitted in any medium without royalty provided this notice is preserved.
at 4:33 AM