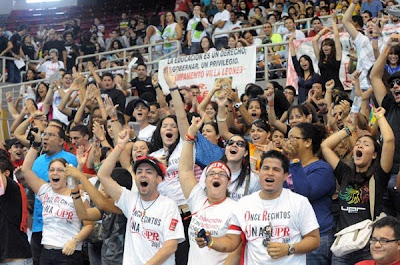 Thousands of Puerto Rican students voted on June 21 to end their two month long strike which had shut down ten of the eleven campuses of the University of Puerto Rico. Student leader Shirley Rosado called the strike settlement an “historical achievement” in which the students “rescued the true purpose of the university [of Puerto Rico] to guarantee high quality public education to the people of Puerto Rico.” (Puerto Rico Daily Sun, June 26, 2010)

The University of Puerto Rico system includes 65,000 students and more than 5,000 faculty members. According to Victor M. Rodriguez Dominguez, in his excellent article, “Puerto Rican Student Strike – Victory and Context as Recurring Social Struggle in The Oldest Colony in the World,” “More than 33 per cent of Puerto Rico’s 25 years and older population has some post-secondary and/or university education. This is higher than more developed nations like Finland and New Zealand. Puerto Rico, with a population close to four million has developed a philosophy about the need to have an accessible system of public higher education. ... Access to higher education, while not specifically enshrined in the constitution is also considered a right and not a privilege by most Puerto Ricans. The state support and relatively low tuition attests to that philosophy.”

The students were striking in opposition to the plans of the administration of the University of Puerto Rico with the support of Puerto Rican Governor Luis Fortuño to double university tuition, as well as to take steps towards privatization of the University. Striking students also defended current tuition exemptions for students based on merit and economic need. The strike settlement was negotiated between representatives of the students and the Board of Trustees of the University with the intervention of a court-appointed mediator. The University Trustees conceded to the students on all three of their demands, and also agreed not to sanction students, faculty members or workers for participation in the strike, or in the many protests and pickets, including a number of clashes with the police. While the University Trustees reserved the right to increase tuition next year, the students took a “preventative strike vote” and vowed to continue their struggle in case increases are imposed.

U.S. imperialist domination of Puerto Rico has persisted since U.S. imperialism took over the domination of the island from Spanish rule in the Spanish-American war of 1898. Puerto Rico remains an open colony of the United States to this day. The following excerpt from a resolution entitled “Independence and Socialism for Puerto Rico!” adopted at a Marxist-Leninist Conference sponsored by the predecessor organization of the Revolutionary Organization of Labor, USA, in July, 1981, we believe is still valid.

The Puerto Rican Student Strike victory took place in the context of the global capitalist economic crisis in which the U.S. imperialist-controlled Puerto Rican government has been trying to make the Puerto Rican masses pay for the crisis through the elimination of public sector jobs, privatization of state-run enterprises and the cutting of social benefits. Students joined the labor movement in a national general strike last October in protest of the firing of thousands of public workers. In turn, the well-organized student strike was supported by labor unions, including the university faculty and clerical workers union, religious organizations, as well by their parents and the community at large. This is a victory for the oppressed Puerto Rican nation and a blow against U.S. imperialism and its colonial domination of the island. It reflects the continuing vitality of the Puerto Rican national democratic struggle on the road to Socialism.

“For the proletariat needs the truth and there is nothing so harmful to its cause as plausible, respectable petty-bourgeois lies.”