The following is from the book “Low-Wage Capitalism,” a Marxist analysis of globalization and its effects on the U.S. working class by Fred Goldstein, published in the fall of 2008. This excerpt is from Part 3, “Lessons from the Past for Future Struggles.” Part 3 covers a wide range of struggles from the 1930s to the present showing the capacity and willingness of the U.S. working class to engage in militant struggle at great sacrifice. For more information visit Low-Wage Capitalism, book website.

An excerpt from Part 3 of the book, printed in the last issue of WW, asserted that the decline in the labor movement was not inevitable because workers were willing to fight back against the anti-labor offensive of the last 30 years. The following are the first three in a series of examples illustrating this willingness of the rank-and-file to struggle. 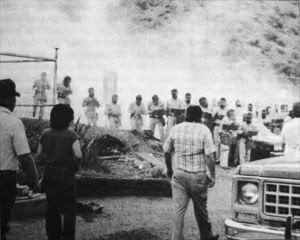 Militant worker resistance to a dangerous challenge arose during the Phelps Dodge struggle in 1983. The company, a giant transnational monopoly, provoked the United Steelworkers and a number of other unions at its copper mines in Morenci, Ajo, and other towns in Arizona, as well as in Texas, into a strike by demanding across-the-board concessions. These included cuts in wages and benefits, an end to cost-of-living adjustments, and a two-tier system with lower wages and benefits for new workers. The company refused to follow pattern bargaining that the union had established in the rest of the industry.

The workers, who were mainly Chicanos, rebelled against concessionary demands. The company advertised for scabs in the newspapers. The workers answered this challenge by massing at the Morenci mine and other mining towns with pipes, bats, and chains to stop the scabs. They forced the company to shut down the mine. But “liberal” Democratic Governor Bruce Babbitt, who had been endorsed by the union, stepped in and set up a 10-day “cooling-off” period, after which, at the behest of Phelps Dodge, he organized a massive counterattack. He sent in Huey helicopters, hundreds of state troopers, the National Guard, tanks, and other military vehicles to protect the scabs.

Various local unions raised funds and tried to give solidarity, but the national USW and the labor leadership let the miners battle on alone against Phelps Dodge, which was not only one of the largest mining corporations in the world but was aided by the capitalist state. The company evicted the miners from company-owned housing, barred them from company-owned hospitals, wore the workers down, and broke the union. It set a precedent for attacks on mineworkers throughout the region. 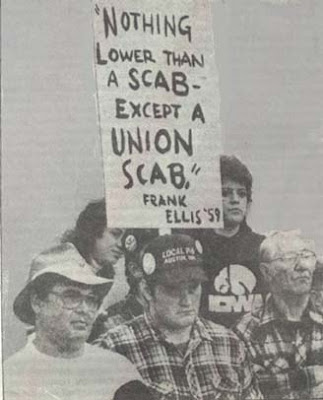 The struggle of the Hormel meatpackers of Local P-9, United Food and Commercial Workers (UFCW) in Austin, Minnesota, became a national cause within the labor movement and the progressive movement in general because the local decided to take a stand against concessions. In August 1985, after a wave of concessions, wage cuts, layoffs, and destruction of unions in the meatpacking industry, the workers of local P-9 rejected Hormel’s demands for wage cuts. By a 92-percent margin they voted down a wage cut from $10.69 to $8.75 an hour-an 18-percent reduction in pay-and then initiated a boycott of Hormel. The UFCW leadership at first sanctioned the strike but later condemned it, ordered the workers back to work, and suspended the local.

The Hormel workers sent agitators to cities throughout the country and got material support from more than 3,000 locals. Movement activists and tens of thousands of unionists and local officials came to the area. Jesse Jackson compared the struggle to the one in Selma, Alabama. In April 1986, 6,000 labor activists from around the country came to Austin to try to shut down Hormel’s operation with mass pickets and other forms of obstruction to block scabs.

The workers faced teargas, police attack, and arrests. Governor Rudy Perpich, a Democrat, sent in 300 National Guard troops against the strikers. But what made the defeat of the strike inevitable, a strike that lasted a year and a half, was the hostility of the national leadership of the UFCW and the refusal of the AFL-CIO to join the battle on a national basis in the face of company strike-breaking and the intervention of the state. This major confrontation, which had been brought on by Hormel, was recognized as a highly significant battle among the rank and file of the labor movement. The workers at Hormel and far beyond showed more than a willingness and desire to unite and fight back at great sacrifice. * 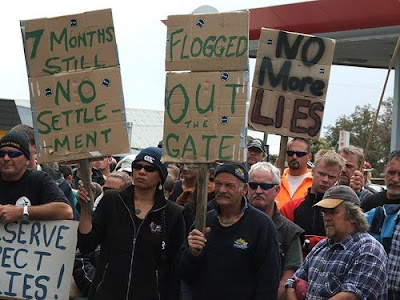 In 1989 miners at the Pittston mines in Virginia and West Virginia launched another struggle against concessions. This one lasted ten months. The UMWA called its strike headquarters Camp Solidarity. During four months more than 3,000 workers and activists came to help stop the scabs and lend support. When the court imposed fines on the union for mass picketing, 46,000 workers went out on a wildcat in 11 states. Workers and supporters occupied one mine for four days. It was dubbed Operation Flintstone after the Flint sit-down strike of 1937. The Daughters of Mother Jones, made up of miners’ wives and daughters, women miners, and community supporters, occupied Pittston’s regional headquarters in Lebanon, Va.

The miners had to face police and federal marshals and were subjected to mass arrest, injunctions and $63 million in fines. At a critical point in the strike, the Industrial Council of New Jersey voted to ask the AFL-CIO for a one-day union stoppage in support of the Pittston workers. But the AFL-CIO did the opposite, advising state federations to stick to food banks and newspaper articles and remain within the contractual frameworks that forbid strikes.

In the end the union fought off most of the concessions on pensions and retirees’ health. It was a victory for the workers, but one in which they had to compromise. The AFL-CIO leadership refused to spread the strike and rally the workers as a whole to support this massive show of worker militancy and self-organization. Once the strike was settled in January of 1990, after intervention by the George H.W. Bush administration, there was no attempt to maintain the momentum of the struggle against concessions.

*Jeremy Brecher, “Resisting Concessions,” 1998, www.zmag.org/zmag/viewArticle/12731.
Articles copyright 1995-2010 Workers World. Verbatim copying and distribution of this entire article is permitted in any medium without royalty provided this notice is preserved.
at 2:09 AM