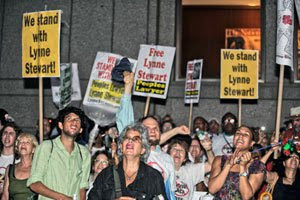 Every struggle against the criminal injustice system in the U.S. today is a struggle to maintain morale and a combative spirit in the face of overwhelming repression, systematic racism, isolation and intimidation.

In every trial of a political prisoner the victim becomes the criminal through orchestrated media demonization and prosecutorial lies and distortions. The most important role of a defense committee is to again and again mobilize people to respond with determination and solidarity through long trials and often frustrating years of legal appeals.

This past week “people’s attorney” Lynne Stewart faced the outrage of being returned to court for an even harsher sentence at the demand of reactionary judges on a higher court who had denounced her original sentence of 28 months as too lenient.

The entire case against Stewart is about a wildly fabricated charge of aiding terrorism based on a press release Stewart made 10 years ago for a convicted former client, Sheik Omar Rahman. Stewart, Ramsey Clark and Abdeen Jabara defended the sheik at a trial in 1995.

In April 2002 Attorney General John Ashcroft had federal agents arrest Stewart without warning and charged her with crimes that were not even on the books at the time the press release was issued. Stewart was sentenced four years ago by the same Judge John G. Koeltl to 28 months in prison. Judge Koeltl has now caved in to judicial and media pressure and quadrupled her original sentence to 10 years in federal prison.

It is the mobilizations of love and solidarity in the streets that will help keep 70-year-old Stewart alive as legal challenges and a new appeal are raised.

On July 8 at Judson Memorial Church several hundred people packed a powerful solidarity rally for Stewart. The event was extremely well organized with tables of food, literature, CDs, speakers, drummers, music and a large screen with videos of Stewart and photos to help mobilize for the week ahead.

On July 14, the night before the resentencing hearing, hundreds rallied at the Metropolitan Correctional Center, next to the federal court building where Stewart was being held. There were two hours of speakers and chants, followed by a march to the front of the jail.

Activists and Stewart’s large extended family first took the streets in front of the MCC. At the rally site Stewart could be seen waving with both fists raised behind the bars, double grill and glass of her cell on the second floor. Drums, horns and chants resounded off the walls.

For an emotional hour there was a wild echoing chorus expressing love and solidarity and determination. Every form of energy and sign language that could raise Stewart’s spirits was thrust forward. During the entire time Stewart kept her clenched fists raised.

Hundreds turned out hours before for Stewart’s resentencing on July 15. Even with long lines and security checks the main court room and overflow court rooms to accommodate hundreds more were packed with supporters. The mood was grim but determined as people filed out of the courthouse and pledged to continue the fight.

The determination is enormous to continue the struggle to appeal this outrageous sentence and free Lynne Stewart.

The writer is a co-director of the International Action Center, a main organizer of the support activities for Stewart.
Articles copyright 1995-2010 Workers World. Verbatim copying and distribution of this entire article is permitted in any medium without royalty provided this notice is preserved. 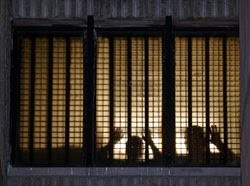