The following is from the book “Low-Wage Capitalism,” a Marxist analysis of globalization and its effects on the U.S. working class by Fred Goldstein, published in the fall of 2008. This excerpt from Part 3, “Lessons from the Past for Future Struggles,” covers a wide range of struggles from the 1930s to the present that show the capacity and willingness of the U.S. working class to engage in militant struggle at great sacrifice. For more information visit Low-Wage Capitalism website.

An excerpt from Part 3 of the book, printed in the July 1 issue of WW, asserted that the decline in the labor movement was not inevitable because workers were willing to fight back against the anti-labor offensive of the last 30 years. The following are three militant struggles which are part of a series of examples touched upon in the book that illustrate this willingness of the rank and file to struggle. Three other examples were in the July 8 issue. 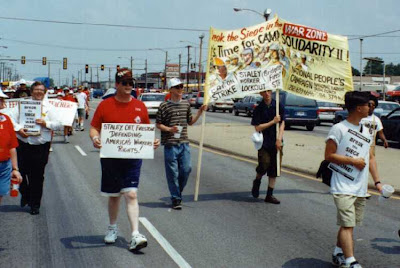 There were numerous other struggles during this period. Some were won, most were lost, but all involved militant resistance by the workers. The local unions were left to fight major corporations, most with worldwide holdings and deep pockets, without the support of the national labor leadership. These locals had to rely on their own efforts to rally solidarity from other locals and communities around the country.

The workers at International Paper waged militant struggles in Maine and Pennsylvania in 1987 to stop concessions. Greyhound workers belonging to the Amalgamated Transport Union fought concessions with militant struggle in 1990. They occupied bus terminals, battled scabs and police all across the country, and occasionally took even more forceful measures.

The “war zone” struggles in Decatur, Illinois, referred to the battle of three local unions against Caterpillar, Staley, and Bridgestone/Firestone between the years 1993 and 1995, all in the same city at the same time.

The Staley workers waged a dynamic and determined struggle. They had answered concessions with a “work-to-rule” campaign but were finally forced out on strike. After being locked out, they sent contingents of “road warriors” around the country and created a support and solidarity network. The three unions banded together eventually, but were unable to get the required national mobilization of the AFL-CIO to push back against the corporate war for concessions. The bosses were in a common front against all three unions, but the labor movement would not mount a corresponding front to push back. 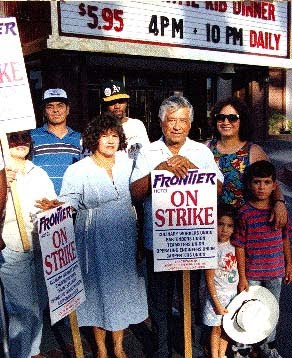 During the same period, Culinary Workers Local 226, affiliated with the Hotel Employees and Restaurant Employees (HERE; now merged into UNITE HERE), carried on a militant organizing campaign at the big gambling casinos in Las Vegas. Earlier, the existing unions had been broken when big financial operators moved in to take over the casinos. The campaign to rebuild the unions was based upon empowering the low-paid immigrant and African-American kitchen workers and maids and establishing stewards and leadership committees in all the departments. The union carried out strikes, mass marches, and sit-ins and negotiated a major agreement in 1989 that considerably lifted the standard of living of the workers.

The struggle against one of the holdout casinos, the Frontier, was a legendary battle and a landmark in recent union history. It lasted six and a half years. There were picket lines twenty-four hours a day, seven days a week. In 1992 the union organized a march across the Mojave Desert to Los Angeles. The next year, a solidarity march from Los Angeles to Las Vegas met up with a demonstration of 20,000 that shut down the famous strip there.

The strike was supported by the solidarity of the rank and file. Non-striking members of Local 226, also low-paid workers, voted to increase their dues so those on strike could get benefits of $200 a week. The national union strongly backed the strike. The company finally surrendered in 1998 in the face of unbreakable solidarity and militancy. During the strike the union continued its organizing drive. The union has inspired others and lent assistance to organizing drives in hospitals and the building trades in Nevada.

Based on the militancy of the rank and file, their willingness to sacrifice, brave arrest, and take risks, and the high consciousness of worker solidarity, Las Vegas has become a center of union revival in a period of anti-labor reaction. 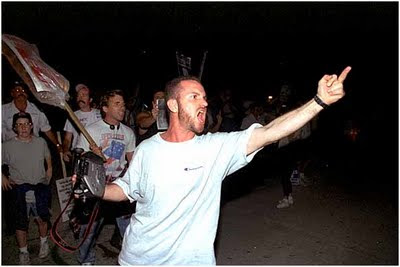 During the Detroit newspaper strike against concessions, which lasted from 1995 to 1997, six unions representing workers at the Gannett and Knight-Ridder newspaper empires militantly battled a lockout and scab herding. The potential for a landmark victory against concessions was considerable, given that the strike took place in the center of unionism in the Midwest and the workers were determined not to give in.

The critical moment in the strike took place early on as the Detroit working class flexed its muscles. The 2,000 striking workers were joined by reinforcements from the Detroit labor movement. The workers set up mass picket lines at the printing plants, fought the police and scabs for hours at a time, and stopped production. A court then issued an injunction establishing a ten-picket rule. The local labor leadership made the critical decision to back down in the face of a court injunction against mass picketing.

In spite of the injunction, groups of 1,000 workers set up lines at distribution centers every Saturday night and fought the cops for three months, either stopping or cutting down the crucial Sunday newspaper distribution. But the leadership called off these picket lines.

Instead of escalating the struggle, the union leadership bowed to the courts. From then on the billionaire news empires won the war of attrition and the strike was finally called off in February 1997. The fight to restore the locked-out workers shifted to the National Labor Relations Board and the courts, where the relationship of forces was unfavorable, especially once the pressure of the workers’ struggle was gone.

Even after the strike was called off, there was a chance to revive the struggle. In July 1997, the AFL-CIO brought 100,000 workers from forty-five states and Canada to descend on Detroit to demand restoration of the jobs of the locked-out workers and removal of the scabs. The mass march that took place was a demonstration of potential working-class power, but it was censored out of the national news by the capitalist media.

This was an opportune moment to revive a genuine struggle. It was not hard to mobilize such a massive demonstration because Michigan, headquarters of the Big Three automakers, had been devastated by plant closings and concessions for more than fifteen years. Signs saying “No Scab Newspapers” were in thousands of stores, on lawns, and in every union hall in Detroit, including the UAW, where the autoworkers were also under pressure to make more concessions. While the unions in the Decatur “war zone” had been defeated, the masses of unionized workers were eager to show their desire to fight back.

Calls and petitions for massive demonstrations of the labor movement and even for a one-day general strike had surfaced early in the strike. But the AFL-CIO leadership waited a year and a half to call a mass demonstration — and then it was after the strike was called off. They made it a purely symbolic gesture rather than a call to arms.

Most of these struggles were defensive ones, against concessions. They remained defensive and had to fight against overwhelming odds. The official labor leadership of the AFL-CIO and the dozens of international unions that make it up let each struggle remain as an isolated guerrilla action of individual locals fighting against big capital, which had the state and the banks behind it. 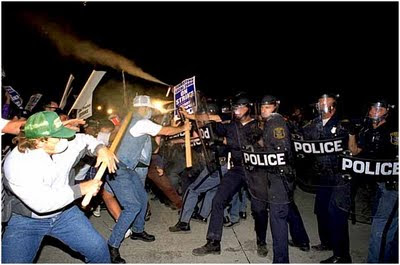