CPC(ML): The Weakness of Global Monopolies Versus the Strength of the Working Class Movement

It is fashionable to speak of how powerful these global monopolies have become; even certain working class organizations bemoan the apparent power of the monopolies. Direct experience and theory teach us something more complex. They point to fundamental weaknesses in the monopoly camp that workers have only just begun to penetrate. Contrary to the assumption that global monopolies are all-powerful and can overwhelm workers and even entire nations, they are part of the dialectical process of change, development and motion and will reveal their objective weakness when confronted by a conscious workers' opposition.

Predators prey on weakness. They prey on the most vulnerable, the young, the infirm and elderly. Monopoly predators feed on working class weakness. When the working class is organized to defend the rights of all and is ideologically strong and partisan, it is the rich and their monopolies that reveal their fundamental weakness.

The monopolies and state may appear stronger and more ferocious at this time, as they certainly have during the yearlong strike at Vale Inco and during the crisis in the forestry sector. The appearance of ferocity is a telltale sign of desperation to block the working class from building its strength. Instead of backing away from this frenzy of the rich, the working class must courageously organize and prepare itself and its allies for resistance. Organized conscious resistance makes the working class movement stronger and weakens the global monopolies. 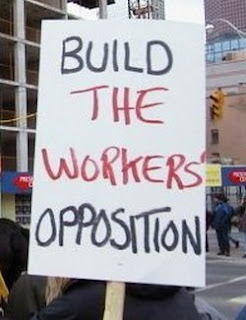 When workers challenge monopoly right with staunch resistance, as Vale workers have done this past year, they force the monopolies to expose the reality that they are obsolete and a block to progress. The monopolies do not want the modern working class to gain any confidence in its abilities to manage the economy and society without owners of capital weighing them down. With working class strength through conscious resistance comes the realization that the monopolies are not necessary, that they are an impediment to social harmony and prosperity, that they are relics of mediaeval privilege and lawless impunity and the source of recurring economic crises.

Direct experience propels thinking Canadians to understand that Vale, U.S. Steel and all the rest of the global monopolies do not represent any benefit to Canada, either net or gross. The monopolies want to steal more and more of the added-value produced in Canada and take it out of the economy.

Added-value produced by Canadians, such as that created by Inco and Stelco workers, is divided amongst three main claimants that exist in time and space within Canada:

1) the Canadian working class who are the actual producers and providers of services;

It is obvious to all involved that Vale, U.S. Steel and other global monopolies want to lower the portion of added-value claimed by the Canadian working class and governments. It is as simple as that. The arguments of the monopolies that they want to be more competitive and drive down the costs of workers are a smokescreen to hide the simple reality that they want to reduce the claims on added-value by both the Canadian working class and governments. The rich and their global monopolies want more of the social product for themselves.

The new collective agreement at Vale will reduce the claim of workers on the added-value they produce. This will reduce the amount of income tax and other individual taxes paid by Vale Inco workers. Corporate income taxes have been continually reduced year after year. The net result is less social product (added- value) claimed by Canadian workers and governments and more social product claimed by the global monopoly Vale, of which almost all will leave the mining and metallurgical communities, the country and its socialized economy.

For the working class, the monopoly arguments of competition and working class costs are a farce and big lie to hide the truth that the monopolies want more of the added-value for themselves. Many workers understand that if they were to eliminate all the claims of owners of enterprise capital, debt and land on the added-value that workers produce then Canadian enterprises would be the most competitive in the world. Owners of capital acknowledge this when they insist that government-owned enterprises represent "unfair" competition because much less of their added-value is claimed by owners of capital, in particular owners of enterprise capital, making public enterprises more competitive. More of the added-value of government-owned enterprises stays within the socialized economy thereby strengthening it and becoming a factor against economic crises.

The Canadian working class in its recent battles with the global monopolies has shown its unlimited potential. It has only just restarted its battle in earnest to affirm itself in the new conditions of the anti-social offensive both on the economic front in its trade union head to head battles with the monopolies, and on the political front in organizing for democratic renewal so that working class politics can neutralize monopoly right politics and engage in a determined struggle over the direction of the economy and control of the state machine.

This talk of the overwhelming power of the monopolies is to keep workers in thrall and not engaged in conscious participation to build a working class movement of, for and by workers themselves. Aggressors, such as the global monopolies, want their prey to imagine the overbearing strength of the predator and remain paralyzed with fear doing nothing or little to organize resistance.

Join the movement to build a Workers' Opposition! 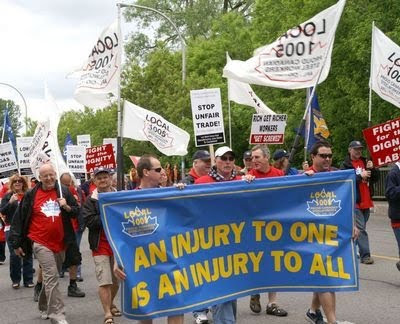