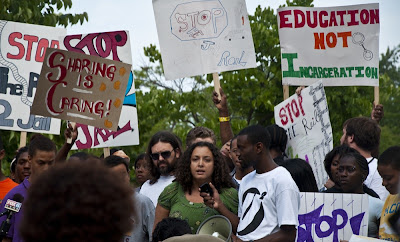 From: Fight Back! News

Shorewood, WI - After enormous pressure from the community, bogus charges against a Black high school student accused of stealing chicken nuggets were finally dropped. Hundreds of people rallied in support of freshman Adam Hernandez outside the Shorewood Village Hall July 20.

The $2.60 chicken nuggets ignited a controversy when school administrators called police to arrest Hernandez for stealing from the school cafeteria. Hernandez was given the nuggets by a friend who did not want them.

The charges against Hernandez were finally dropped just before several hundred community members were expected to rally in his support. “They wanted to send me to jail, but instead I’m gonna send them an invitation to my college graduation!” said Adam Hernandez to hundreds of supporters.

“We asked them to drop the charges and they said no! But the power of the people made them say yes!" said organizer Ava Hernandez before hundreds of supporters at the victory rally.

Organizers credited the outpouring of community support for holding police accountable for the racist arrest, but said the struggle is still far from over for oppressed nationality students. Ava Hernandez said, “We want a permanent antiracist training program,” and, “We want the police out of the schools, they have no purpose there!”

“We are here today to demand an end to the school-to-prison pipeline,” said Anahí Sánchez of Movimiento Estudiantil Chicano de Aztlán (MEChA). Members of Waukesha Students for a Democratic Society (SDS) held a banner calling for, “Schools not prison.”

“This group will grow bigger and bigger, until we have the city that we want to live in!” said David Bowen, program director of Urban Underground. On the heels of a big victory, activists promised to fight back against the racist attacks in and out of schools.
at 6:14 PM