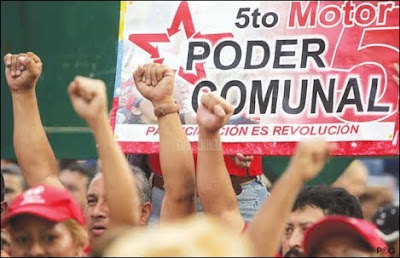 On June 25 Tony León, Secretary-General of Venezuela’s National Workers Union of the Ministry of People’s Power for Energy and Petroleum, met with U.S. workers and union leaders during the U.S. Social Forum in Detroit.

The two-hour meeting explored deepening collaboration, exchange and solidarity efforts. Current and retired U.S. autoworkers, letter carriers, and public service workers, including union leaders from the United Electrical workers, participated in the round-table discussion along with Mexicans, Colombians and others from Latin America.

The June 24 reflection by Fidel Castro, “How I wish I was wrong,” was read in English and Spanish and warned that while the world was watching the World Cup soccer match, U.S. and Israeli warships were moving toward Iran to impose a naval inspection zone for ships entering and leaving Iranian ports. This aggression threatens a wider imperialist war there and also against the Democratic Peoples Republic of Korea where the sinking of a South Korean military vessel was used to inflame war fever against the DPRK.

Fidel’s message reinforced the urgent need for uniting working class forces in unions and social movements internationally to confront the intractable global capitalist crisis that, without intervention by working and oppressed people, drives relentlessly to war.

U.S. military aggressive moves are aimed at Latin America, too. The U.S. Fourth Fleet and expanded U.S. bases in Colombia target Venezuela and Cuba. León characterized that as a grab for natural resources, since the U.S. has only a 10-year supply of remaining oil.

León extended an open invitation to the Third Union Conference of Nuestra America (Our America) scheduled for July 22-24 in Caracas. Ecuadoran and Brazilian national central unions hosted the previous meetings, first in Quito and next in Sao Paolo, to develop a common understanding of the global economic crisis and agenda for united struggle for workers and their organizations.

The benefits of unity and collaboration for improving the lives and futures of the workers, Indigenous and socially excluded people are evident in Venezuela. The advances achieved there in the past 10 years, particularly in education and health care through the Bolivarian Alliance for the People of Our America and the Peoples Trade Treaty (ALBA-TCP), are exemplary.

U.S. slander that Venezuela gives “free” oil to Cuba under the ALBA trade agreements was debunked by León. Venezuelan oil is exchanged at market rate, but it is not traded in U.S. dollars. This form of exchange using the sucre international trade currency is outside the imperialist-dominated capitalist economy.

Not only Cuba and Venezuela have benefited, but Ecuador, Bolivia, Nicaragua, Honduras prior to the 2009 coup, Haiti through Petro-Caribe, and more. Through this collaborative effort, illiteracy has been abolished in Venezuela and Bolivia using Cuba’s ‘Yo si puedo’ (Yes I can) program, and the international mobilization is determined to help all ALBA countries develop their most basic important resource — the people.

What we aspire to from this point forward, summarized León, as he opened the floor for questions and discussion, is to have meetings to see how we can work together with ALBA, including workers from the United States.

In response to a question about unions hearing the voice of their members, León said that a political view of union work was necessary. Workers cannot continue losing rights; organizing has to focus on more than shop issues.

A San Francisco labor council delegate described how a massive labor-community solidarity action in the Port of Oakland stopped the unloading of an Israeli ship for 24 hours on June 20 in solidarity with the Palestinians under siege in Gaza as well as the victims of the Israeli pirate attack on the Mavi Marmara and the Freedom Flotilla.

León pointed out that solidarity is urgently needed with the Sindicato Mexicano de Electricistas — the electrical workers in Mexico who provided electricity and were driven from their jobs by the military. Demonstrations are needed at Mexican consulates demanding that President Felipe Calderon respect the right of labor unions to organize and restore jobs to SME members.

To join a U.S. delegation to Venezuela for the Nuestra America III, e-mail laborexchange@aol.com.
Articles copyright 1995-2010 Workers World. Verbatim copying and distribution of this entire article is permitted in any medium without royalty provided this notice is preserved.
at 4:25 AM