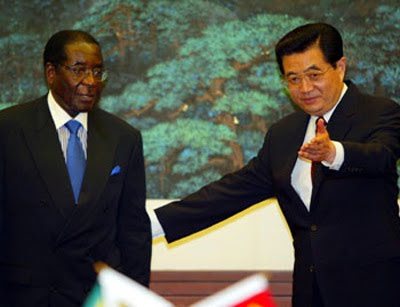 A major impediment to economic development in Africa and other former colonial territories in the world has been the legacy of imperialism and its stronghold on the productive forces within these states. The phenomenon of neocolonialism has hampered so-called Third World countries from exercising their independence irrespective of the political and class character of the leadership within the developing nations.

In recent years numerous African governments have sought to increase their trade and economic cooperation with nations having similar histories of colonial domination. These efforts have caused much consternation in the West where the imperialist states have sought to maintain influence over the political direction taken by the developing countries.

The United States since the conclusion of World War II has become the dominant imperialist power in the world. According to Kwame Nkrumah, the first leader of independent Ghana during the 1950s and 1960s, the U.S. had overtaken the European powers in regard to economic control of Africa and other developing regions of the world.

Although the official U.S. policy after the war was ostensibly in support of colonized states gaining their national independence, the actual aims of the U.S. ruling class were to replace the European imperialist system with a more sophisticated mechanism of indirect rule.

Nkrumah in his 1965 book entitled “Neo-Colonialism: The Last Stage of Imperialism,” writes: “Foremost among the neo-colonialists is the United States, which has long exercised its power in Latin America. Fumblingly at first she turned towards Europe, and then with more certainty after world war two when most countries of that continent were indebted to her. Since then, with methodical thoroughness and touching attention to detail, the Pentagon set about consolidating its ascendancy, evidence of which can be seen all around the world.”

In Africa there has been a strong concentration of mineral extraction, since the continent contains large volumes of strategic natural resources that are vital to both the capitalist production process and the U.S. military-industrial complex. Various governments have been and still are under tremendous pressure to supply key sectors of the U.S. and other industrial economies with the minerals needed to maintain their dominant positions within the international market through the maximization of profit.

Nkrumah writes: “More energetic exploration for metal and mineral resources was undertaken in Africa and elsewhere. Africa’s raw materials are an important consideration in the military build-up of the NATO countries, in which are included those of the European Common Market.”

This constant supply of African resources has been the guiding force behind U.S. foreign policy toward the continent. Governments have been overthrown in Africa while they attempted to exert a greater degree of independence from Western imperialism and to move the national economies of these states toward socialism. This was the motivation behind the United States in its pivotal role in toppling the Nkrumah government.

In a section of Nkrumah’s “Neo-Colonialism” entitled “Monopoly Capitalism and the American Dollar,” he writes: “Their industries, especially the strategic and nuclear factories, depend largely upon the primary materials that come from the less developed countries. Post-war Europe sustained a precarious shortage of basic supplies for its steel manufactures. Belgium needed more rich ores, Sweden more coal and coke, which America supplied in return for fine ores.”

A recently released Economic Development in Africa Report 2010 by the United Nations Conference on Trade and Development (UNCTAD) entitled “South-South Cooperation: Africa and the New Forms of Development Partnership” examines the rising levels of trade between the continent and other developing regions including the People’s Republic of China.

This report indicates that the total trade in merchandise with developing countries outside the continent increased significantly from $34 billion in 1995 to $283 billion in 2008. This represents the fastest growing area of trade between Africa and other areas of the world.

According to UNCTAD Secretary-General Supachai Panitchpakdi, who unveiled the report at the World Expo 2010 held in Shanghai on June 18, the strongest growth in trade has taken place between Africa and Asian states, with the PRC being the most significant. China’s trade with Africa was recorded at $93 billion in 2008, making it the second largest partner after the U.S. In Nigeria alone, a recently signed oil cooperation agreement with China is reported to involve between $32 billion to $50 billion in trade and investment.

The report found that trade between Africa and China had increased by 1,000 percent during the period 2000-2008. Today China accounts for 11 percent of the continent’s external trade, with the bulk of transactions taking place in the sectors of primary products, including fuel and minerals.

In contrast to the legacy of trade between Africa and the Western imperialist states, trade with China has been important in fostering economic and social development. UNCTAD economist Janvier Nkurunziza refutes allegations by Western-based media sources that China’s increasing role in Africa is not benefitting the continent.

Nkurunziza says, “The challenge is for Africa to find ways to harness and manage this relationship for better developmental outcomes.” He did not view China’s growing relationship with Africa as a “new form of colonialism,” arguing that this emerging economic cooperation was based on the principles of “mutual respect, reciprocal benefits, respect for sovereignty and non-interference in the internal affairs” of the continent. (Engineering News, June 18)

Even though the various African states are moving to diversify their economic relations with countries and regions throughout the world, the imperialist states continue to undermine development efforts. In Nigeria various multinational firms and the Obama administration have escalated pressure on the government of Africa’s most populous country, which is a large trading partner with the U.S. in the oil sector.

High-ranking U.S. officials have sought to influence the structure and pace of the Nigerian electoral process, claiming that political stability inside the West African state is vital to its financial and security interests. A Petroleum Industry Bill that has made its way through the parliamentary process is now stalled at the executive level due to the concerns expressed by multinational oil firms.

Royal Dutch Shell’s representative Mutiu Sunmonu said in a June 17 Reuters interview that the firm was placing potential investments on hold pending the outcome of the final implementation of the PIB. “Just looking at deepwater alone, we have a portfolio of about $40 billion worth of projects ... but we will not be able to make a move on these until we have a landing on the PIB. That is potential investment that we are not able to sign off on at this time.”

Increased attention has been given to the role of multinational oil firms in Nigeria that have dominated that industry since 1956. In light of the oil disaster in the Gulf of Mexico, it has been pointed out that there are frequent occurrences of a similar nature in Nigeria. Yet never is the same amount of publicity given to these environmental disasters as the one currently plaguing the Gulf States.

In the same article Sunmonu said, “The U.S. government’s all-out fight to contain the BP oil spill in the Gulf of Mexico is a marked contrast to the situation in the Niger Delta, leading local communities and campaigners to ask why Shell and other international oil firms in Nigeria are not paying compensation.”

Sunmonu continued, “It is incorrect to draw a parallel. ... The law in Nigeria is very clear. We do not pay compensation for sabotage spills,” attributing the pollution to theft and not technical malfunctions.

At the same time, in recent years the U.S. military involvement in Africa has increased, with the formation of the Africa Command and the 2009 war games that the Pentagon held in the Gulf of Guinea as well as in several West Africa states. The presence of a U.S. military base in the Horn of Africa nation Djibouti and the flotillas of warships off the coast in the Gulf of Aden demonstrates clearly that imperialism is still very much committed to maintaining its stranglehold on the continent.
Articles copyright 1995-2010 Workers World. Verbatim copying and distribution of this entire article is permitted in any medium without royalty provided this notice is preserved.
at 1:11 AM