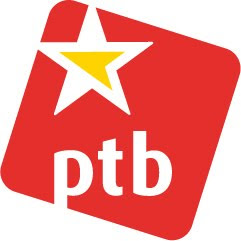 From: Fight Back News

Fight Back News Service has translated and is circulating the following article from the Workers Party of Belgium’s (PTB) press service on the recent election in Belgium. The rightist, reactionary New Flemish Alliance (N-VA), which advocates the breakup of Belgium, scored major gains in this election.

PTB+ leaping in Wallonia and in Brussels, and growing in Flanders

“We are happy about the leap of the PTB+ everywhere in Brussels and in Wallonia” stated Raoul Hedebouw, spokesperson of the PTB+. “The PTB+ is also progressing in Flanders, especially in Antwerps, despite the huge success of the N-VA.”. As example the PTB+ obtained 4.2% of the votes in the county of Liège, 4.1% in Antwerps and 2% in Brussels area.

“We are grateful to all the voters whom entrusted us. According to the first results we would be tripling our votes in Wallonia and in Brussels compared to 2007 and we would grow by 50% in Flanders,” added the spokesperson of the left party. “A left protest vote has been expressed towards the four big French speaking parties. With this result we are going to continue playing our role as a mosquito and be on the alert concerning cut plans to come and the political crisis the country is likely to face.”

“It is even more important to underline the signal given by the votes for the PTB+ in the city of Antwerps and in Flanders given the context of shifting to the right and nationalism.” says Peter Mertens, president of the PTB+. “Of course the score of the N-VA are alarming. The risk of the country being immersed in a month’s long deep crisis is even more dangerous given the context of an economical crisis of unseen proportions. History showed us where the mix of crisis and nationalism could lead to. With our party we want to resist that. We want to build bridges between the two communities with our national and bilingual party.”

Raoul Hedebouw, candidate for the House for Liège province stresses that results of the PTB+ for the province are above 3%. “With such results on the province level, it becomes possible to have one representative after the next national or regional elections. And with 4.2% for the Liège county, we could have our first City Council member by 2012.” Thanks to a 4.1% score Peter Mertens could become the first PTB+ Council member by 2012 in Antwerps, the largest city of Flanders.
at 2:58 AM