Venezuela: Workers and State Rally for Nationalization and Anti-Corruption Measures 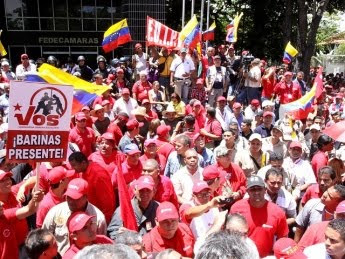 Mérida, June 2nd 2010 (Venezuelanalysis.com) – The struggle against inflation, corruption, and destabilization in Venezuela’s economy continued this week. Workers from nationalized companies marched to protest hoarding and price speculation and call for worker-run management, while national investigators arrested the former president of the state-run food company PDVAL for alleged involvement in the diversion of food from the market.

Thousands of workers from food companies and cattle ranches that have been nationalized in recent years, as well as workers from nationalized electricity, petroleum, and mining companies marched to the headquarters of Venezuela’s largest private business chamber, FEDECAMARAS.

The workers expressed their strong support for the government’s policy of nationalizing companies in strategic sectors of the economy and constructing an alternative system of production and distribution co-managed by the state and workers, with the goal of constructing “21st Century Socialism.”

The workers fervently denounced FEDECAMARAS and the former private owners of their companies for socially irresponsible behavior, including violations of workers’ rights, hoarding and price speculation, and corruption.

FEDECAMARAS was a prime mover behind the 2002 coup d’état against President Hugo Chavez. The chamber’s president at the time, Pedro Carmona, was appointed dictator following Chavez’s kidnapping.

“This is the only government that has truly given the workers their collective contracts, their job security, and their pay,” said Mercedes Gutierrez, also from Fetralec.

Luis Yaguare told the state news channel VTV that workers went seven months without their salaries and suffered a management-imposed lockout at the Bauxite processing company Norpro prior to its nationalization. “We are going to support the wise decisions of President Hugo Chavez and we will demonstrate true worker control in Guayana City, Bolivar state,” said Yaguare.

Pascuala Salmeron from the sardine processing plant La Gaviota, which was nationalized in April 2009, said, “The owners of the company, the capitalists, left it with the machinery damaged. In spite of this, we have been able to move the company forward.” Two months after its nationalization, La Gaviota workers elected a six-member council to manage the company’s administration.

Several marchers countered what they called the “media campaign” to falsely assert that production has decreased at the nationalized companies. Sergio Solarte of the sugar plant Central Venezuela said production has more than doubled, from 3,800 to 7,800 sacks of sugar, since last year’s nationalization.

According to Venezuelan Vice President, Elías Jaua, production has increased in eighty per cent of nationalized companies over the course of Chavez’s ten-year presidency.

“They never gave us our severance pay. The company disguised the labor relationship saying it was contract work in order to infringe on our rights,” said worker organizer Jhonny Ricappa.

The National Assembly formally denounced Polar two years ago, and Polar officials agreed to open negotiations with the workers, but this initiative has been delayed, Ricappa explained.

Such worker protests and ongoing, unresolved grievances were the grounds for several nationalizations in past years. President Chavez has repeatedly made clear he does not rule out the possibility of nationalizating the food giant.

This conflict is also evidence of the common practice among private companies in Venezuela of pushing more and more workers into non-unionized contract labor in order to maximize profits, a practice the government’s nationalization program seeks to eradicate.

The recent protests motivated President Chavez to make a visit to the state-owned cooking oil factory Diana Industries in Carabobo state on Wednesday to rally support around the government’s economic program, meet with the workers at the nationalized company, and declare “economic war” against the capitalist bourgeoisie.

Chavez emphasized that private businesses largely depend on the state for credits and raw material supplies. “With me, gentlemen of the bourgeoisie, the bread crumbs have run out,” Chavez affirmed.

“I accept your challenge, unpatriotic oligarchy. Let’s see who will last longer, you or me,” Chavez declared, after mentioning by name the head of Polar, Lorenzo Mendoza. “This is a social, economic, political, and more than anything moral war.”

Also during the visit, Chavez clarified that his administration is not against the “honest business people” who follow national laws. He said he will only nationalize those companies which violate laws, infringe on worker rights, and threaten the national economy.

Venezuela’s private sector out-grew the public sector during five consecutive years of general economic growth prior to the 2008 world financial crisis. Recent figures show an overall 5.8% contraction, with slight growth in key areas of public investment, such as housing and education.

“Each time we raise the minimum wage, they go and increase prices,” Chavez said. “And the same cars you can buy in Bogotá, they sell them in Caracas at triple the price,” he added.

“This is what they want, to create a great conflict, so the country will be ungovernable in order to justify international intervention, to carry out a coup d’état, or to substitute the president by way of a document, like what happened in Honduras [in June 2009],” President Chavez concluded.

In a crackdown on corruption in the state-owned food producer, distributor, and marketer PDVAL, which is managed by the state oil company, PDVSA, authorities from the national Bolivarian Intelligence Service (SEBIM) arrested PDVAL’s former president, Luis Pulido, on charges of hoarding food.

The arrest occurred after SEBIM officials found 1,300 industrial crates full of rice, milk, flour, cooking oil, and other essential food items in the state-owned storage facility CEALCO in Carabobo state, which contracts with PDVAL. The food had past its expiration date. In nearby Cojedes state, 800 containers full of rotting food were discovered after neighbors complained of the smell.

Pulido was PDVAL’s first president after the company’s creation in 2008, and he served until last year. The group Popular Organized Anti-Corruption Interrogation (AIPO, by its Spanish acronym), a network of workers formed with the purpose of uncovering corruption through informal intelligence networks, associated him with the “endogenous right wing,” or the corrupt bureaucratic element within the state apparatus.

In a public denunciation released in 2008, AIPO said Pulido was part of “a food mafia that has been growing within all the public institutions dedicated to the distribution and mass marketing of foods.”

This mafia is guilty of charging commissions on purchases and conducting illicit auctions for purchases by the state company, in which PDVAL buys from the company willing to pay the most kickbacks for company heads, according to AIPO.

President Chavez publicly condemned corruption in PDVAL, saying such practices violate PDVAL’s mission, which is to provide food at state-regulated prices. He demanded jail time for those responsible.

“The revolution has created a true distribution network for good, cheap food for all the Venezuelan people,” said Chavez. “Now, we cannot pardon errors such as this one… we must correct these flaws and continue moving forward in the battle against inefficiency, corruption, and bureaucracy,” said the president.

In addition to PDVAL, the state has provided foods at subsidized prices through thousands of local Mercal markets since 2004. Last month, the government nationalized a major flour producer and reformed the 2001 Land Law to facilitate further re-distribution of idle lands from rich landowners to the state and small-scale food producers with government credits.
at 2:27 AM