From: The Plain Dealer

by Everdeen Mason, The Plain Dealer 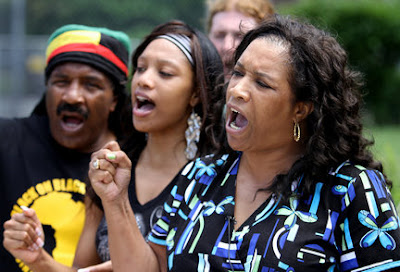 CLEVELAND, Ohio -- Cuyahoga County prosecutors have dropped charges against one of two sisters arrested at a student protest in front of Collinwood High School.

Destini Bronaugh, 19, and her 17-year-old sister were arrested May 13 during the protest over school closings and teacher layoffs. The sisters struggled with four police officers who slammed them against a police car and the sidewalk while handcuffing them.

Bronaugh's charges, assault and resisting arrest, were dropped June 23. Prosecutors and city officials said the charges could be reinstated after more investigation.

"The investigation is continuing," said Andrea Taylor, city spokeswoman. "It should be completed any day now. At the end of the investigative process is when a determination will be made."

Bronaugh's younger sister was charged with assault on a police officer, resisting arrest, aggravated disorderly conduct and violating daytime curfew. The family did not know the status of the girl's charges. No one at the Juvenile Court was available to comment on the case.

Tina Bronaugh, the mother of the arrested students, said her daughters did nothing wrong.

"I believe Cleveland police attacked my daughters in retaliation for student-organized protests," she said at a Monday afternoon rally for the sisters at Collinwood High School.

She was joined by about a dozen members of local grassroots organizations such as Cleveland FIST, the Imperial Women and the Oppressed People's Nation.

"We are glad that the charges have been dismissed against Destini and we hope this case is done," said Kathy Wray Coleman of the Imperial Women, which organized the protest.

Tina Bronaugh said she did not want her children to be used as pawns between the Cleveland Teacher's Union and the city over the schools transformation plan.

"As a mother, I beg them to leave my children alone," she said.

Protestors said that students often complain about police brutality. They also called for the protection of students' right to free speech.
at 1:51 AM