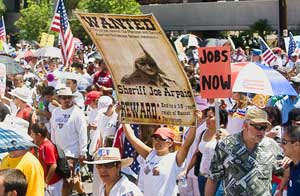 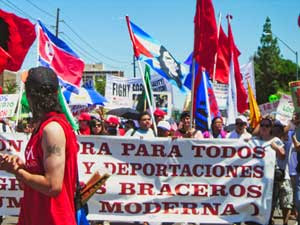 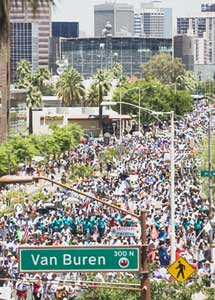 A massive march filled the streets of downtown Phoenix on May 29 as close to 200,000 people gathered to denounce the racist SB 1070 law and show their determination to fight back against this anti-immigrant attack. The streets were packed from curb to curb for over three miles as demonstrators made their way along the six-mile route that began at Steele Indian School Park, snaked its way through downtown and ended at the state Capitol building.

People began gathering at the park at about 6 a.m. and by 8:30 a.m. the opening rally got underway. The emcees for the opening rally were two children, a girl and a boy — both 8 years old — who led the crowd in chants of “No SB 1070!” and “¡Sí se puede!” Notable speakers included Isabel García of Tucson, who addressed the crowd in Spanish and said, “We will not have border militarization! We will not have criminalization of those who want to work!”

Two Black women from New Orleans spoke. They were Katrina survivors who have experienced racist oppression similar in some ways to what has been unleashed in Arizona. After recounting the horrors that the Black population of New Orleans faced in the wake of Hurricane Katrina, they told the crowd, “You’re not alone. We got your back, Arizona! We got your back! We are going to make sure that SB 1070 becomes BS 1070!”

Indigenous members of the Tohono O’odham Nation, whose traditional lands exist on both sides of the U.S.-Mexico border, explained the irony of how they, the original inhabitants of this continent, would be subjected to the racial profiling of SB 1070 because they are a brown-skinned people. They went on to say that all those of European descent who have migrated to southern Arizona are here as guests of the Indigenous people, who have been living on these lands, caring for them and living in harmony with them, for thousands of years. The Tohono O’odham elders then gave a traditional blessing and left the stage to lead the march on its six- mile journey.

The march itself had contingents from all across the country, including BAYAN-USA, the International Action Center and the May 1 Coalition for Worker and Immigrant Rights. Groups from the California cities of Sacramento, San Francisco, Los Angeles and San Diego as well as groups from as far away as New Orleans and Maryland were there. The increasing temperature did not affect the spirits of the marchers, who kept up their militant chanting for the entire march route. When the march passed the Wells Fargo building in downtown Phoenix, where racist Sheriff Joe Arpaio maintains an office, marchers stopped and directed their chants against Arpaio, shouting, “Hey! Hey! Ho! Ho! Joe Arpaio has got to go!”

On the evening of May 29 and all day on May 30 several activist meetings focused on determining the next phase of the struggle against SB 1070 and for immigrant rights. The concerns raised repeatedly in these meetings were the need for unity and the need for the immigrant and oppressed community to act in their own independent interests.

The role that some groups play in the movement for immigrant reform was raised. Many of these groups, while doing some important work in the community, have attempted to divert the anger against SB1070 into waiting for yet another election and for the Democratic Party to meet their demands.

But just how many Novembers can the people wait before real change is made?

The thousands marching in the hot Arizona sun, like those who marched in the tens of thousands in D.C. on March 21, are demanding no less than legalization for the undocumented and an end to the war on immigrants. Nothing less is acceptable.

The passage of SB 1070 and its tag-along bills, like the one attacking ethnic studies, have not only provoked the outrage of the oppressed communities, but they have also changed the attitude of many activists and leaders in these communities. Many have lost their patience with those they elected and know that immigration reform from the U.S. Congress will not benefit the undocumented and migrant communities. The workers and oppressed talked about the system of capitalism and how this is a fight between workers and capital.

As the state moves forward with its plans to repress the workers, to divide them during this time of capitalist economic crisis, workers and oppressed are waking up and seeing through the thin veneer of lies. This summer — with calls for a Freedom Summer Arizona by many people and organizations — provides the opportunity to continue building the unity, solidarity and understanding of the class struggle needed to successfully fight back and defeat racist attacks like SB 1070.

The writer is an organizer with the Tucson May 1 Coalition.
Articles copyright 1995-2010 Workers World. Verbatim copying and distribution of this entire article is permitted in any medium without royalty provided this notice is preserved.
at 2:31 AM