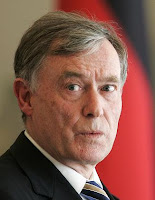 BERLIN — President Horst Köhler of Germany resigned on Monday amid a barrage of criticism for remarks he made a week ago during a surprise visit to Afghanistan.

It is the first time that a German president has ever resigned.

Mr. Köhler’s resignation from the largely ceremonial post is a blow for Chancellor Angela Merkel, a close friend and an important conservative political ally.

His resignation comes just a week after another leading conservative politician, Roland Koch resigned as premier of the state of Hesse, saying he had had enough of politics.

Mr. Köhler, a former director of the International Monetary Fund and the European Bank for Reconstruction and Development, shocked Germans earlier this month when he said that the country’s soldiers serving in Afghanistan or other peacekeeping missions were deployed to protect German economic interests.

Usually, German leaders justify their soldiers’ presence in the American-led coalition by saying they are needed to thwart would-be terrorists who might use Afghanistan as a base for attacks in Europe.

But, in his contentious remarks, Mr. Köhler said: “A country of our size, with its focus on exports and thus reliance on foreign trade, must be aware that military deployments are necessary in an emergency to protect our interests, for example, when it comes to trade routes, for example, when it comes to preventing regional instabilities that could negatively influence our trade, jobs and incomes.”

In a short statement on Monday, Mr. Köhler said he regretted his remarks, saying he could not remain in office in the face of intense criticism and loss of confidence. He was accompanied by his wife, Eva Luise.He praised the German troops serving abroad, adding he deeply regretted his remarks and how they were misunderstood.

“The criticism damaged the respect for my office,” he said. “I announce my resignation, immediately. I hope you understand my decision. It was an honor to serve Germany.”

After the resignation Mrs. Merkel canceled a planned visit with the German national soccer squad, in training in northern Italy for the forthcoming World Cup in South Africa, according to Germany’s DPA news agency.

Under German law, a successor must be chosen within 30 days by the so-called Federal Assembly of legislators and representatives chosen by Germany’s 16 states.

When Mr. Köhler was elected to his second five-year term in May, 2009, the assembly consisted of 612 members of the lower house of Parliament and an equal number of state representatives. He secured victory by a single vote, capturing re-election by 613 votes. Despite the ceremonial nature of the office, the election of a president is seen by politicians as a barometer of party solidarity.