An enormously powerful earthquake and tsunami struck just off Chile near the city of Concepción on Feb. 27, wreaking vast destruction in the region, killing at least 800 people and leaving up to 2 million people without homes.

Workers World newspaper extends its solidarity to the working class and the people of Chile in this time of need. We also protest the corporate media’s undue attention to alleged “looting,” similar to the propaganda that was used in Haiti to justify state repression and imperialist intervention.

Any natural disaster under capitalism exposes the fault lines of the society, and while such a catastrophe can affect anyone in that society, overall it is always the poor who are hurt the most. This could be seen in Haiti and again in Chile.

The following is an English translation of excerpts from an excellent on-the-spot description and analysis of the events, found in a declaration of the Movement of the Revolutionary Left (MIR) in Chile. It explains how the inequalities and injustices existing in Chile impact on the disaster, what the people need now and how revolutionaries should act under these emergency conditions.

The earthquake revealed in the most brutal manner the chains of interests connected with those who are part of the dominant economic and political regime. Although in this moment we believe what is most needed is concrete actions, small though they may be, of solidarity with the families and communities affected by the earthquake, we also consider it necessary to point out the following:

1. The old government-constructed highways and bridges resisted the quake. The new highways in the capital, no. The highways that were privatized under the Coalition governments [center-left coalition that has won every election since 1988], which were propagandized as public-private investment, did not stand up to any single seismic movement and are destroyed. In spite of millions in government subsidies, in spite of contracts, in spite of the daily fees from users, all the overpasses, bridges, pedestrian passages have come down, killing people and injuring many more. ...

2. The Christian Democracy, from its control of the Ministry of Housing, left behind so much scandal and corruption in building low-cost housing that the Coalition ended up privatizing the low-cost housing program. Now, with the earthquake, people are being evicted in different parts of the country because their homes are dangerous. What is appearing are the consequences of the speculative fever in new housing construction, directly and indirectly subsidized by government programs, which have enriched well-known figures in the Coalition and the right wing: Entire middle-class housing complexes are at the point of collapsing, as did the 15-story apartment house in Concepción, killing or trapping more than 100 of its residents. Under capitalism, the business of real estate is not constructing homes but accumulating capital, which makes it worthwhile to lower the quality of construction, lower the quality of the materials, falsify technical reports and bribe inspectors.

3. Major government institutions have functioned slowly and poorly. The Hydrographic Services of the Armed Forces has committed criminal negligence in not knowing how to interpret its own instruments. It sent incorrect information to the National Emergency Office with respect to issuing a tsunami alert. This resulted in a delay of 24 hours before the government recognized that a tsunami was hitting the coasts of Constitución, Iloca, Pelluhue, Curanipe, Talcahuano, Concepción, Contulmo, Juan Fernández, etc. It left defenseless the coastal and island populations of our country, who were the hardest hit by this catastrophe in terms of injuries, deaths, disappearances and other casualties. ... As a result of a lack of coordination between the central government and state institutions, large parts of the country are completely isolated, without water, without electricity, without food. ... In spite of the financial resources, the help is not reaching where it should reach: the people.

4. As time went by, the earthquake finally showed who it was really affecting ... the poor. In the Bio Bio region, one of the poorest in the country, where unemployment is 10.4 percent and where the majority who work live from day to day, there is no drinkable water, no electricity, no food, many are unable to return home and are outside without overcoats. The speculators in misery are charging 3,500 pesos (approximately $7) for a kilo of bread and 1,000 pesos (approximately $2) for a quart of water. The people have broken through the barriers into the supermarkets to obtain what they need to live or to sell or exchange with others: water, milk, diapers, flour, food. ... It is the women who began the movement, as often in our history, for their children and families. Although some criminal gangs have turned up to take advantage of the desperate situation of the people, the reality is evident: help from the government is not arriving or is arriving in insufficient quantities to meet the needs of the people. The people have not hurt small business owners — they went against the large supermarkets and distributors like Líder y Santa Isabel. ...

5. The people are turning to direct action to resolve their vital needs. Jacqueline van Rysselberghe, the mayor of Concepción, from the earliest moment called for military intervention, as did the president elect, Sebastián Piñera. The directors of the supermarkets (including D&S Wal-Mart and Jumbo) went directly to the Presidential Palace. Almost magically, the government declared a State of Catastrophe, which is a form of martial law that allows for the suspension of constitutional guarantees and fundamental rights, without needing Congressional approval. The Minister of Defense announced he was mobilizing 10,000 soldiers.

Those logistical resources that for more than 12 hours were not used to help the earthquake victims, were freed to protect the interests of management and of the “order” inside the center of Concepción city. Not one soldier was sent to defend the little owned by the poor ... or to repress the speculators.

The [Michelle] Bachelet government in this way not only ended up as the most repressive of all the Coalition governments, not only ended up being the government that facilitated the return of the right wing to office, but also ended up handing over the Maule and Bio Bio regions over to the military and imposing a curfew, for the first time since the beginning of the transition to a restricted democracy, between 9 p.m. and 6 a.m.

We in the Movement of the Revolutionary Left are completely in agreement with the necessity, legitimacy and justice in the people’s opening the doors of the supermarkets and distribution centers to get their basic necessities that can contribute to alleviating in some way the effects of the earthquake that our country has suffered. Where our members can be an active part of this process, they should join in as quickly as possible. ...

[The soldiers cannot bring order to the poor neighborhoods,] because they have arrived once again to protect only the interests of the ruling classes and “public order” of the masters of power and wealth.

We call on the revolutionary organizations and the totality of the left organizations to defend the population, to combat speculation with the people’s necessities and the attempt of criminal gangs to take advantage of the situation.

We call on the revolutionary organizations and the totality of the left organizations to contribute, to the extent of their capabilities, to raising an emergency struggle platform that will unite struggles and demands representing a broad sector of workers and community members.

Facing the lack of support from the bourgeois government, people to the streets!

To EXPROPRIATE the exploiters IS A PEOPLES RIGHT!

Revolutionaries to the front ranks to gather and distribute food, water and clothing!

The people advance through struggle!

Movement of the Revolutionary Left (MIR) of Chile

Part of this statement was translated by Earl Gilman and posted on MarxMail, part translated and edited by WW. 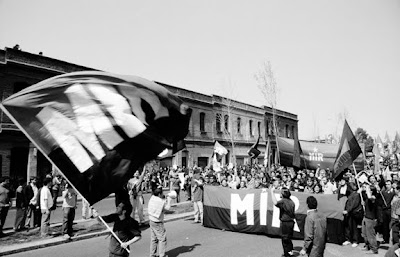