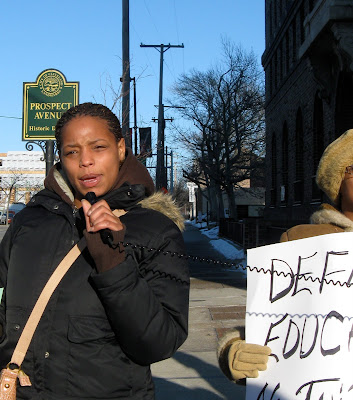 New profiling: Being in your home while Black

Chanting, “Drop the charges!” and “Free the Whitbys!” activists gathered Feb. 24 on the steps of the so-called Justice Center, which houses Cleveland’s police department, courtrooms and jail. Several pointed out that it is the cops — who brutally beat Rebecca Whitby in an unprovoked attack — who should be on trial, not the 23 year old and her mother, who tried to shield her from some of the blows.

Signs in the crowd called for people who have been similarly falsely accused by officers Mitchell Sheehan and James D. Bryant to come forward. The cops’ explanation for the April 23 beating is that Whitby went for their guns, which remarkably had neither her fingerprints nor her DNA. Whitby’s attorney, Scott Ramsey, is pursuing leads based on indications that this was not the first time the two officers had used this excuse for a suspect’s injuries.

Other signs at the rally proclaimed, “Cleveland’s new profiling: Being in your own home while Black,” and called on Mayor Frank Jackson to suspend the two cops pending an investigation.

Following the rally, supporters and family members of the Whitbys filled the courtroom for the start of the trial. Judge Stuart Friedman made it clear that he had been informed of the demonstration. “This is not a football match or a soccer game,” the judge told the audience. “I will not hesitate to have anyone arrested and held in contempt of court for causing a disturbance.”

Using the excuse that all courtroom seats would be needed for potential jurors during jury selection, Judge Friedman announced that the public would be excluded during this process.

Whitby was initially released from the grand jury without charges. It was not until the day after the family filed a report with the police department’s Office of Professional Standards that she and her mother, also named Rebecca Whitby, were charged with felonies.

The family also requested that the FBI examine whether what Marva Patterson, Whitby’s aunt, calls “the heinous acts of violence” by the police constitute a violation of the Whitbys’ civil rights. Despite inconsistencies in reports filed by the police and their lack of congruity with facts such as times on photos, along with racial slurs overheard by witnesses, the family has been told there is not enough evidence to prove a civil rights violation.

Patterson feels that, at the very least, the false statements, including workers’ compensation claims, are crimes for which the police should be charged. “They are being protected by the color blue,” she said.

In addition, when medical care was finally provided, the police told the hospital staff that Whitby’s injuries were self-inflicted and persuaded them to give her the powerful psychotropic drug Geodon without a prescription. Patterson states, “It is clear from the hospital records that this was done because Rebecca was already telling the nurse that the police had beaten her. She was then placed in a four-way restraint, which is not allowed for a patient who has been medicated.”

The campaign for the Whitbys is mobilizing people everywhere to put pressure on the Office of Professional Standards and on the FBI so that their reports are produced in time to help the Whitbys’ trial. Activists are asked to call Police Chief Michael McGrath at 216-623-5000, e-mail him at police@city.cleveland.oh.us or fax him a letter at 216-623-5584. To expedite the findings of FBI agent Dan Leeper, call Special Agent in Charge C. Frank Figliuzzi at 216-522-1400, e-mail him at cleveland.cv@ic.fbi.gov or fax him a letter at 216-622-6717.

Whitby and her family have put together a Web site to explain the April 2009 incident and allow supporters to get to know her better: www.thealhambraincident.ning.com. Signing in as a member lets her know that she has support from across the country and around the world.

The police, prosecutors and judge are facing a community that sees clearly that if the Whitbys can be brought up on false charges for standing up against racist violence, then the same could happen to anyone. That is why a broad coalition of organizations and individuals have shown up at every hearing, including members of Imperial Women, the Peoples Fightback Center, the Lucasville Uprising Freedom Network, Cleveland FIST (Fight Imperialism, Stand Together), Books2Prisoners, Cleveland Anarchist Black Cross, Oppressed Peoples Nation, Black on Black Crime Inc., Stop Targeting Ohio’s Poor, the Cleveland Jericho Movement and the Northeast Ohio Anti-war Coalition.
Articles copyright 1995-2010 Workers World. Verbatim copying and distribution of this entire article is permitted in any medium without royalty provided this notice is preserved.
at 1:48 AM

Hey, this is Mike.

This is complete bull shit. The only crime the girl did was be black.