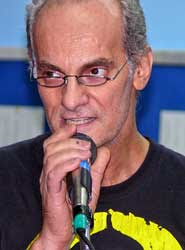 Sebastian Pernice, who died Feb. 1 of lung cancer, was born in Militello, Sicily, in 1948. He came to the U.S. with his parents when he was eight. By the age of 14, he was fearlessly and unapologetically gay and had fled New Jersey for Manhattan three times, sleeping on the streets or in squats. His father, a textile worker, consulted friends who advised that “to make him a man,” Sebe should be sent to family in Sicily. His family had never heard the gay slogan, “We are everywhere.”

Sebe returned to the U.S. at 17, more rebellious and adventurous than ever, where he joined the community of gay street people in New York City. Eventually, his parents welcomed him and his partners to family holiday dinners.

He was an educated man, accepting only self-chosen education — a GED, auditing many classes at Columbia University, paying tuition for a few. He was intensely interested in ancient history, anthropology, linguistics, the geology of Manhattan Island, computer technology. “I went to college not to learn how to become successful and secure, but only to learn.”

Diagnosed as HIV positive in 1987, he for years refused AZT treatment because he had observed serious side effects. “I’m not sick,” he said. “Get that stuff away from me.” He remained strong and active until 2001, when he accepted anti-viral medications after a bout of pneumonia.

Sebe detested oppression and injustice with every cell and nerve in his body and at first considered himself an unaffiliated anarchist. Anti-racist and for free expression of sexuality, he identified with women, with workers, with the hungry. In 2008 he became a Marxist and part of Workers World Party, deciding to work in an organized fashion for a society that would allow the world’s peoples to flourish in every way.

And work he did. On Thursdays, Sebe enlivened the weekly newspaper mailing. Handsome and exotic in an Italian airline pilot’s long black coat, he would be greeted by cheers and hugs. After distributing fruit and sweets from his beloved Chinatown, the pot of pasta was put on to boil. Enlivened with different toppings each week, it was consumed by all with talk and laughter. Then Sebe went to work. There were bundle orders to send out, computers to maintain, mailing labels to run, Friday-night dinners to organize. He became indispensable.

Undeterred by painful hip-bone deterioration, he came to union pickets and anti-war rallies, and demonstrations in support of Palestine, Mumia Abu-Jamal and other political prisoners. He was on the line supporting the striking Stella D’oro workers in the Bronx. He spoke at the November 2009 Workers World Conference on widening Party lesbian, gay, bi, trans work.

Last year at a WW forum on the fabled Stonewall Rebellion of 1969, Sebastian recalled his participation. A video of that meeting captures his comments: “We grew up on the civil rights movement. Stonewall was the opening battle for our rights.” He recreated some of the sound and fury of that June night.

“Vans and police cars lined the block. The police had come to rescue those [cops] trapped inside. They formed a line in front of the bar. We filled the streets curb to curb. Then an amazing thing happened. Marsha [Johnson], Sylvia [Rivera], myself and a dozen others began to sing what had become our anthem. We gave them a little cancan. Tune: Tararaboomdeay. ‘We are the village girls, we wear our hair in curls, we wear our dungarees, above our bony knees ... ’

“For four beats — utter silence. Then they charged. We ran. We had only our invective and anger against helmets, shields and billy clubs. The night was over but the struggle was not. We sustained sporadic activity for a year, culminating in the first Gay Pride march — ‘Out of the ghettoes, into the streets.’

“Until the goals we set for equal rights and justice are achieved, Stonewall is not over.”

In the West Village five-floor walkup where Sebastian lived with his partner Tim, there is an evergreen wreath with tiny lights, candles illuminating his collection of small ceramic houses, plants — color and beauty everywhere, half of the furnishings harvested from the streets by his ever-searching eye. Morning sun streams through unimpeded windows: the sweep of pigeon flights delighted him.

The doctor had presented options: “With chemo, maybe a year; with palliative care, maximum three months.” Loving life so passionately, he left it as he had lived it, with courage, on his terms, and with thought for those who loved him most.