Mobilize to demand government give jobs 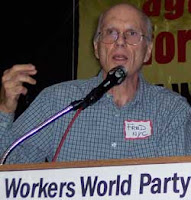 The big business media and the Obama administration trumpeted the message of hope and recovery last week when the government announced a drop in the official unemployment rate.

The Bail Out the People Movement, however, is not waiting around for a job recovery. Instead it is building a broad-based coalition to go to Washington on April 10, the 75th anniversary of the Works Progress Administration. It will demand a massive government jobs program to give every worker a job at a living wage or a guaranteed income. Eight million workers got jobs under the Roosevelt administration’s WPA during the Depression of the 1930s.

This mobilization will be an answer to the smoke and mirrors coming from the government about the job situation and job creation.

Official government reports declared that the unemployment rate dropped from 10 percent to 9.7 percent in January. In the same government report, however, came the baffling announcement of a net loss of 20,000 jobs in the same month. This number is inexplicable. Various attempts to fathom this contradiction have been made by citing “seasonal” adjustments, recalculations of the workforce, etc.

But it all adds up to government statisticians manipulating numbers in order to give the working class false hope for a meaningful economic recovery. The aim is to keep the workers and the communities quiet so they will leave everything to the government, the bosses, the bankers, and the capitalist parties and politicians instead of mobilizing to fight back.

What the workers are facing now is a massive, historic crisis of capitalist overproduction. The capitalists are always claiming that what is needed in the economy is more “productivity.” Productivity means getting more production out of workers in less time. The capitalists all aim to produce more and capture a larger share of the market in order to make more profits.

In their competition for markets and profits, the capitalists produce way beyond what the workers can afford to buy with their wages. Then there is a crisis of overproduction. Factories and stores shut down. Workers are laid off. But then they have even less money with which to buy.

The crisis of overproduction gets worse over time as the bosses create new machinery and more and more ways to speed up workers. This time it has reached a new level. Now the bosses are trying to restore their profits and operations by laying off more workers.

Most big companies, like Ford, General Motors, Microsoft, Wal-Mart, Oracle, IBM and on down the line, have laid off workers permanently. This is the way they fight their profit/market crisis — by creating a crisis of unemployment for the working class. The contradictions that fly in the face of official optimism demand a broad response.

The Labor Department has now revised previous data and admitted that things are much worse than Washington has been saying all along. The economy contained 1.36 million fewer jobs in December than originally thought, a downward adjustment of roughly 1 percent. Using this reduced number forced an overall annual adjustment, which showed that 8.4 million workers have lost jobs since the downturn began in 2007 — more than a million above the previous estimate. The revisions showed the economy lost 150,000 jobs in December, far more than the 85,000 initially reported. (New York Times, Feb. 6)

Those out of work for six months or longer swelled to 6.3 million in January, from 6.1 million in December — the highest level since the government began tracking such data in 1948. While the number of workers forced to work part time was reduced, there were still three-quarters of a million who dropped out of the workforce because they gave up looking for jobs.

The unemployment rate reached 16.5 percent among African Americans, 12.6 percent among Latinos/as, and 26.4 percent among teenagers. Some 11.8 percent of immigrant workers were unemployed in January, compared to 10.3 percent of U.S.-born workers, the Labor Department said on Feb 5. (Wall Street Journal, Feb. 6) The decline in construction has devastated the immigrant community, especially the undocumented.

Juan Ralda, 23 years old, told the Journal that he is an expert in masonry who worked for a contractor in Santa Monica, Calif., until bank financing dried up residential projects.

“I haven’t had steady work for a year,” said Ralda, a Guatemalan immigrant. He used to send home $300 a month to help support his mother and three younger siblings. “Now, I barely earn enough money to eat and pay the rent.”

Budget cuts on top of layoffs

Making the need for a mobilization of the unions, the unemployed, the communities and the working class in general more pressing, states like California, Michigan, New York, Florida, Nevada and many others are cutting their budgets while funneling billions of dollars in interest to the banks. They are making the workers and communities suffer the crisis while the likes of Goldman Sachs, Wells Fargo, Citibank and Bank of America rake in record profits and bonuses.

Food pantries are running out of food because of the rise in the number of hungry people. The homeless population is growing under the impact of foreclosures and evictions. Hospitals are closing; public schools are starved for funds; college students are forced to drop out of school because of tuition increases. Yet the vaults of the banks are filled with untold sums of money given them by the government in the form of interest payments and just plain handouts.

Those interest payments coming from the government treasuries are taken from workers’ wages, in the form of either payroll taxes or sales taxes. Wages that workers sweated for are being taken from social services and redirected into the treasuries of the rich.

The same is true of the Pentagon, which got $700 billion this year alone — taken from the working class and the middle class. The military uses that money to kill and destroy — to make the world safe for the giant corporations that want to control the oil in the Persian Gulf and the region around Afghanistan and Pakistan. Meanwhile, the working class at home goes without jobs.

The message that the Bail Out the People Movement will take to Washington on the April 10 march is that all that money should be used to give workers jobs. The government should take the trillions of dollars that were given to the banks, to insurance companies like AIG, to corporations like GM and Chrysler, and as subsidies to agribusiness — and all the other government handouts that go in one way or another to the capitalist class — and create a fund to give workers jobs or income.

The money should be used for many other things, too — for a moratorium on foreclosures and evictions, especially for the unemployed; for an end to budget cuts; to guarantee education and food security, to name just a few.

But the basic demand for a massive government jobs program on the scale of the WPA must be the starting point for dealing with the crisis of the working class and the massive unemployment brought about by the capitalist profit system.

President Franklin Roosevelt first inaugurated the Civilian Conservation Corps. in 1933 and the WPA in 1935 under the pressure of a mass movement of the unemployed. The masses demonstrated, fought the police, defied sheriffs and marshals, and put evicted families back into their homes by the hundreds of thousands. This movement was threatening the very social foundation of U.S. capitalism.

The WPA at that time was a concession, meant to head off a wider social rebellion and possibly a revolution. The legislation creating the WPA came at the initiative of Washington as a matter of protecting capitalism.

In today’s circumstances, in the absence of a mass movement, Washington and the ruling class are going in the opposite direction from that of the Roosevelt administration — they are funneling tax cuts to businesses. Some $100 billion to $150 billion in so-called stimulus money will go to the bosses in the hope that they will create jobs.

But with at least 15 million officially unemployed, millions more who have dropped out and are not counted, and millions working part time who cannot live on their wages, the government plan is a drop in the bucket that mainly benefits the bosses.

Articles copyright 1995-2010 Workers World. Verbatim copying and distribution of this entire article is permitted in any medium without royalty provided this notice is preserved.
at 7:31 AM

Not sure where to post this but I wanted to ask if anyone has heard of National Clicks?

Can someone help me find it?

Overheard some co-workers talking about it all week but didn't have time to ask so I thought I would post it here to see if someone could help me out.

Seems to be getting alot of buzz right now.