Malcolm X’s legacy lives on 45 years after his assassination 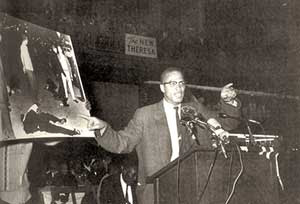 Published Feb 22, 2010 8:59 PM
Forty-five years ago on Feb. 21, Malcolm X — El-Hajj Malik El-Shabazz — had begun his address to a mass meeting of the Organization of Afro-American Unity in New York City at the Audubon Ballroom when several men opened fire on him with shotguns and pistols, killing him.

At the time the corporate media framed the threats, attacks and assassination of Malcolm X as a feud between the Nation of Islam under Elijah Muhammad and former members of the organization who were led by Malcolm X. Yet it has been well documented that the membership of the Nation of Islam and Malcolm X were all under FBI and local police surveillance.


The FBI wanted to cause a rift between Malcolm X and the members of Elijah Muhammad’s family in order to weaken the impact of these organizations on developments within the broader African-American struggle.

Malcolm X’s assassination came at a critical point during the African-American political movement of the 1960s. The Nation of Islam’s newspaper, Muhammad Speaks, had done a superb job in covering developments within the civil rights movement from 1961 to 1963, but had remained largely aloof from the direct action efforts of the Southern Christian Leadership Conference (SCLC), the Student Nonviolent Coordinating Committee (SNCC), the Congress of Racial Equality (CORE) and other organizations.

The program of the NOI called for the creation of a separate state for African Americans in the United States or in Africa. The organization felt that based on the legacy of racism and national oppression it would be impossible for Blacks and white people to be integrated into the same society on an equal basis.


After the April 1962 police attack on the NOI mosque in Los Angeles that resulted in the killing of NOI member Ronald Stokes and the wounding of several others, Malcolm X wanted to engage in broader political efforts to seek justice in the case. City authorities found the killing justifiable. Differences between Malcolm X and Elijah Muhammad over the character of the NOI’s response to the killing of Stokes, coupled with the burgeoning mass movement for civil rights, increased tensions inside the organization.

When the Ku Klux Klan bombed the 16th Street Baptist Church in Birmingham, Ala., in September 1963, killing four African-American girls, Malcolm X’s statements became even more militant in response to this act of racist terrorism and the failure of the John F. Kennedy administration to take effective action in support of civil rights.

Consequently, when Kennedy was assassinated on Nov. 22, 1963, and Malcolm later made comments at the Manhattan Center on Dec. 1 that Kennedy’s death was a case of “the chickens coming home to roost,” he was silenced by Elijah Muhammad. Malcolm would eventually leave the organization by March 1964.

Building on the legacy of Marcus Garvey, Malcolm X emerged during the 1950s as a leader within the Nation of Islam and a militant spokesperson for urbanized African Americans in the U.S. Born to Garveyite activist parents Earl Little and Louise Little in 1925, Malcolm’s exposure to nationalist and pan-Africanist thought began at a very early age.

Malcolm was one of seven children in the Little family. His father Earl, a Baptist minister, often carried him to the mass meetings he attended during the depression years of the 1930s. His father was originally from Georgia and his mother Louise had been born in the Caribbean nation of Grenada. (The Autobiography of Malcolm X)

Malcolm’s parents had originally met at a Universal Negro Improvement Association-African Communities League conference, the organization founded by Marcus Garvey, in 1919 in Montreal. They were leading members of the UNIA-ACL. Louise Little’s articles were often published in the Garveyite newspaper, The Negro World.

Despite the economic crisis facing the U.S. at the time, Malcolm’s family, a close unit, remained self-reliant. The nationalist mood and self-pride exhibited by this family caused tremendous hostility among racist whites in Nebraska, where Malcolm was born. Malcolm and other family members believed that Earl Little was murdered by white racists in 1931 in Mason, Mich., near the state capital of Lansing.

The social pressure from the white power structure in the area around Lansing, Mich., and economic isolation precipitated a nervous breakdown for Louise Little. Her eventual commitment to a state mental hospital and the breakup of the family by the welfare department had a tremendous impact on the Little children.

During his primary school years Malcolm exhibited intellectual capabilities and talents. He dreamed of being a lawyer but was discouraged by a racist teacher who told him that he had to be realistic because he was Black. By 1941, Malcolm had relocated in Boston to stay with his older sister, Ella Collins, the daughter of Earl Little from a previous marriage.

Malcolm worked in menial jobs in pool halls and on transport trains during World War II. He eventually drifted into criminality and drug abuse that resulted in his arrest and sentencing to prison for burglary in 1946.

While in prison he was influenced by an older inmate to read and develop his mind. He then set out to learn as much as possible and to participate in the prison debating teams.

Malcolm soon accepted the teachings of the Nation of Islam at the urging of his brothers, who had entered the organization prior to him. When he was paroled in 1952, he immediately began to work as an NOI organizer under Elijah Muhammad’s leadership.

He rose swiftly through NOI ranks to become the Boston and later New York minister during the mid-to-late 1950s. After he gained national exposure through public speaking and media coverage, the press once again set out to discredit another fearless spokesperson for the African-American masses.

Malcolm X created a newspaper for the Muslim organization, Muhammad Speaks, which as with the Garvey movement proved to be a powerful vehicle for the transmission of the NOI’s ideas to the general public. In addition, Malcolm’s radio and television interviews and debates drew national attention from both the African-American masses and from U.S. political police agencies like the FBI.

By 1963, Malcolm X’s speeches had become more decisively political and secular. He began to de-emphasize certain aspects of Elijah Muhammad’s Black Muslim theology. His remarks at a mass rally held during a grassroots organizers’ conference in Detroit in November 1963 reflected his developing world outlook.

In March 1964 Malcolm announced the formation of an orthodox Muslim Mosque that would rival the NOI and arranged to make hajj in April to Saudi Arabia in order to authenticate himself as a Sunni Islamic believer. When he returned to the U.S. in May 1964, he then established a political group, the Organization of Afro-American Unity, whose objectives were decisively revolutionary nationalist and pan-Africanist in orientation.

In July 1964, Malcolm departed again for Africa and the Middle East to engage in further study, analysis and research and to establish deeper contacts between the OAAU and other revolutionary movements in the so-called Third World. Although many writers have placed emphasis on his conversion to Sunni Islam, Malcolm never lessened his commitment to the revolutionary transformation of the U.S. and the world.

Malcolm spent the bulk of his time between July and November of 1964 in various revolutionary and progressive states in Africa, including Egypt, Ghana, Algeria, Tanzania and Guinea. He developed close political relations with Kwame Nkrumah of Ghana, Ahmed Sekou Touré of Guinea, Gamal Abdel Nassar of Egypt and Abdul Rahman Mohamed Babu, a leading government official and Marxist theoretician from Tanzania.

It was Malcolm’s connections with Babu that resulted in Malcolm’s meeting with the Cuban revolution leader, Che Guevara, during Guevara’s visit to the United Nations in late 1964. Malcolm took a keen interest in Cuba and Che’s role in Cuba’s pending aid to Congo’s revolution during 1965.

Malcolm had been one of the most outspoken critics of U.S. foreign policy towards Congo during 1964, when the Johnson administration had intervened to halt the advances of the revolutionary forces. These revolutionaries were fighting against the Western-backed forces that had overthrown and assassinated Patrice Lumumba in 1960-61.

Malcolm’s public statements became more anti-capitalist and anti-imperialist in character and many believed that had he lived longer, Malcolm would have advanced socialism as a political objective.

Malcolm X also visited England and France during late 1964 and early 1965. In England he made alliances with organizations within the Black and Islamic communities. In France, he embarked upon efforts to form alliances with expatriate Africans and Caribbean nationals residing in Paris. Just before his assassination, the French government prevented his making another visit, apparently in response to U.S. State Department pressure.

During this period Malcolm began to emphasize the central role of women in the national liberation process. In an interview in Paris he told the public, “One thing I became aware of in my traveling recently through Africa and the Middle East, in every country you go to, usually the degree of progress can never be separated from the woman. If you’re in a country that’s progressive, the woman is progressive. If you’re in a country that reflects the consciousness toward the importance of education, it’s because the woman is aware of the importance of education.”

Malcolm continued, “But in every backward country you’ll find the women are backward, and in every country where education is not stressed, it’s because the women don’t have education. So one of the things I became thoroughly convinced of in my recent travels is the importance of giving freedom to the woman, giving her education, and giving her the incentive to get out there and put that same spirit and understanding in her children. And I frankly am proud of the contributions that our women have made in the struggle for freedom, and I’m one person who’s for giving them all the leeway possible because they’ve made a greater contribution than many of us men.” (By Any Means Necessary, p. 179, 1970)

Despite the efforts of the corporate media to distort his legacy and international image since his assassination, Malcolm X has been immortalized by many writers and commentators on African-American affairs. According to journalist M.S. Handler, “No man in our time aroused fear and hatred in the white man as did Malcolm, because in him the white man sensed an implacable foe who could not be had for any price — a man unreservedly committed to the cause of liberating the Black man in American society, rather than integrating the Black man into that society.” (El Hajj Malik Shabazz, documentary film)

During the later years since his martyrdom Malcolm has gained a secure position within the collective consciousness of Africans, oppressed peoples and workers worldwide. His image proliferates in the urban areas of America and his name and spirit are often evoked in relation to the uncompromising character of the African-American struggle for total liberation from national oppression and economic exploitation.

Consequently, the efforts of the mass media, U.S. intelligence services and the capitalist class in general have failed to obscure or co-opt his message due to the efforts of the political heirs of Malcolm X, who have continued to maintain the integrity and principled character of his legacy.