Derek Cannon went on a two-week hunger strike from Jan. 14 to Jan. 28 at Ohio State Penitentiary (OSP), a supermax prison, after getting no response to his factual challenge to a Rules Infraction Board ticket. Cannon, who was sentenced to life in prison after the 1993 Lucasville, Ohio, prison uprising, ended his hunger strike out of consideration for the concerns of his spouse, Kandy Cannon.

Allegedly he and another prisoner got into an argument where they “threw blows but didn’t hit each other,” an absurd charge but the only way the guards could explain the lack of injuries on either prisoner. In fact, the argument was a minor verbal dispute that both Cannon and the other prisoner agree was resolved. 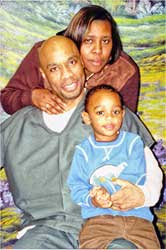 The prisoners have asked to have the truth of the matter demonstrated by consulting the tape from the security cameras, only to be given various excuses ranging from, “There are problems with the tape,” to “There may not be a tape for that area,” and “We go by eyewitnesses, we don’t go by camera.”

The prisoners were not given the tickets on the night of the dispute, but rather the following day by the morning shift corrections officers, who are known to be racists. Immediately after the tickets were given out, the guards went to a separate pod and strip-searched another Lucasville uprising prisoner, Greg Curry.

More than 400 prisoners participated in the April 1993 Lucasville uprising. Unlike the Attica rebellion of 1971, a negotiated settlement was reached after 11 days. However, the amnesty terms of the settlement were quickly violated and 56 prisoners received convictions, with five getting death sentences. (Staughton Lynd, “Lucasville: the Untold Story of a Prison Uprising,” 2004)

Cannon and Curry were two of several prisoners who did not participate in the uprising, but were approached by prosecutors to lie on the stand to convict Keith LaMar (Bomani Shakur), who was sentenced to death. When they refused, the prosecutors concocted murder convictions with life sentences.

At the time of the uprising, Cannon was nine days from parole and had been transferred out of Lucasville in anticipation. He was not even there at the time they said he murdered someone. Cannon stated about this conviction, “I know that being poor, Black and already incarcerated played a major part against me.” (www.ourfight4justice.com) He has spent almost 17 more years in prison, most of it in solitary confinement, for refusing to commit perjury and frame his friend on bogus charges.

As a result of the recent ticket, Cannon was put in segregation in the area known as “the hole,” losing privileges including phone calls with Kandy. The more serious issue is that his status was dropped from Level 4A to Level 4B. He will no longer be allowed to have contact visits with his wife and son. Visits were scheduled for Feb. 6 and Feb. 10.

It also means a longer time until freedom. Cannon needs to be at Level 3 to be paroled.

For the Lucasville uprising prisoners overall, a great deal of progress has been made in recent years in getting status levels improved, recreation with other prisoners and contact visits with their loved ones. In addition, at least six have been transferred out of OSP to other prisons, which places them in general prison populations. Several have even been paroled.

But the Lucasville rebellion resulted in the death of one guard. There is an element among some of the correctional officers of “we will never forgive or forget” that expresses itself in incidents like the present one involving Cannon and Curry. Cannon and his supporters in the Lucasville Uprising Freedom Network have decided that this cannot go unaddressed.

Individuals and organizations are asked to call or send letters to Warden David Bobby, Ohio State Penitentiary, 878 Coitsville-Hubbard Rd., Youngstown, OH 44505, tel. 330-743-0700, fax 330-743-0841. Let him know that tickets should not be given out without a factual basis and that Derek Cannon’s Level 4A status should be restored in time for him to have his contact visits with his family in February.

Supporters of the Lucasville uprising prisoners from around the world will be informing Warden Bobby that the word will be gotten out to other people, organizations, the media and public officials. All will be told that the treatment of prisoners at OSP is so unjust that one of them engaged in a hunger strike as a measure of last resort.

Articles copyright 1995-2010 Workers World. Verbatim copying and distribution of this entire article is permitted in any medium without royalty provided this notice is preserved.
at 6:11 AM