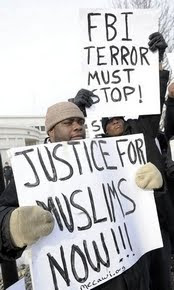 Dearborn -- An autopsy report released Monday prompted renewed calls for an independent federal investigation into the death of a local mosque leader during an FBI raid in October.

Imam Luqman Ameen Abdullah was shot 21 times during a raid on a Dearborn warehouse, according to the report. The cause of death was multiple gunshot wounds.

"Whoever was responsible should be criminally prosecuted," said Azikiwe, who joined a protest at Dearborn Police headquarters Monday. "After they shot him, they dumped him in a trailer like a dog."

FBI agents have said they were justified in shooting Abdullah because he opened fire during their raid on a stolen-goods operation.

Agents said an FBI dog was killed, prompting them to return fire. Only four of the more than 20 agents at the scene fired shots, said a person familiar with the investigation.

"These concerns are only inflamed when the special agent in charge of the Detroit FBI office asserts -- before investigation has been completed -- that 'I'm comfortable with what our agents did,' " Conyers, D-Detroit, wrote.

Dawud Walid, executive director of Council on American-Islamic Relations Michigan, said his organization is requesting copies of the autopsy photographs and has hired an independent pathologist to review the findings. He said the group also wants to see the results of a necropsy on the dog, to confirm it was killed by bullets from a nonpolice weapon, as investigators have said.

"The results we have seen so far are disturbing, and we are going to be investigating more," Walid said. "Three shots in the genital area, and the broken jaw, and a bullet in the back: We don't know how he would have gotten that.

"If he is killed instantly, why is his body found with his hands handcuffed behind his back?"

Special Agent Sandra Berchtold, a spokeswoman for the FBI, said Monday, "This is only one piece of information in this case. We ask that before people make a decision, they wait until all the facts come out."

Wayne County Medical Examiner Dr. Carl Schmidt concluded in his autopsy that Abdullah had several abrasions on his hands, although Schmidt said he could not confirm whether the wounds were caused by a dog.

"At some point his back was turned," Schmidt said. "Whether that means someone meant to shoot him in the back or not, I couldn't say. He must have been slightly turned to the left (at the time of the shooting)."

Schmidt said his probe could not determine whether Abdullah was shot while lying down.

The county's medical examiners routinely testify that they use police reports about circumstances and investigators' observations in helping them arrive at their conclusions. But Schmidt said Monday his office received no information from law enforcement sources to aid in the autopsy's findings.

The autopsy didn't detail the types or sizes of 13 bullets removed from Abdullah's body. There were no gunpowder burns on the body, indicating the fatal shots weren't fired from point blank range.

Schmidt said his medical tests didn't include checking whether there was gunpowder residue on the victim's hands. "That would be something the police would do," he said.

Although Abdullah was not shot in the head, he suffered cuts and abrasions on his face, and a fracture of the bone behind his upper lip. A tooth fragment and broken denture were received with the body.