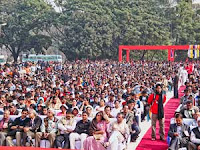 More than 10,000 people gathered under a sea of red flags to open the First Convention of the Socialist Party of Bangladesh, and then held a militant mass march through Dhaka’s crowded streets. Hundreds of nationally elected delegates and many thousands of participants attended the Dec. 30-31 Convention of the SPB, which was formed in 1980. They presented a powerful challenge to the Western corporate media’s view of Bangladesh.
WW photos: Sara Flounders

Almost the only things we ever hear in connection with Bangladesh are that it is hopelessly poor, densely populated and underdeveloped. But whenever revolutionary forces are organizing in the thousands and tens of thousands with anti-imperialist fervor and a clearly focused Marxist perspective of their own problems, they make a contribution to the understanding of the world movement. This can combat corporate media misinformation and imperialist stereotypes.

The Socialist Student Front has announced a major event in mid-March to celebrate the 25th anniversary of its founding. Tens of thousands of students from all the universities and many high schools are expected to attend. It is waging a giant campaign to protest cuts and deterioration of education.

In a country with 60 percent illiteracy, with millions of landless peasants and millions of workers surviving in the most desperate slums, many of the students come from a more privileged background. Students in Bangladesh have a revolutionary tradition and have gone into the streets again and again. For decades the most revolutionary-minded student activists have become determined fighters for the working class. 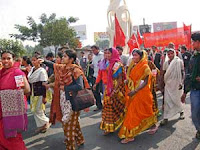 Communism, socialism and revolutionary ideas are still a strong force throughout the Indian subcontinent. Especially in Bengal, East and West, communist ideas have a great support among the masses, among the intellectuals and middle class. There are a number of left parties in Bangladesh, including some reformist Marxist parties that hold elected office in parliamentary coalition governments of the bourgeois state. The SPB has sought to be a revolutionary challenge, not just a parliamentary opposition.

International guests included representatives from the United Communist Party of Nepal-Maoist, the Sri Lankan New Democratic Party, the Socialist Unity Center of India, the ambassador of the Democratic Peoples Republic of Korea, and Workers World Party and the International Action Center in the U.S.

The SPB encourages mutual respect, discussion and unified action or united front actions among the many left parties in Bangladesh. The day after the completion of their convention the Socialist Party sponsored a wide-ranging discussion and question and answer session with the international guests who attended their convention and the leadership of more than 10 left parties, along with independent intellectuals, journalists, filmmakers, Marxist economists, etc. — about 150 people in all.

Many guests remarked about how important it was to have these political discussions. The questions to the delegates from the U.S. concerned the nature of the global capitalist crisis and how intractable it is, the impact of ever expanding U.S. militarism, and why President Barack Obama has continued Bush’s imperialist wars.

In India and in Bangladesh as in Europe some socialist and communist parties have entered bourgeois coalition governments to administer the capitalist state. Always on the agenda is a discussion on the nature of the state in underdeveloped and formerly colonized countries and the role of revolutionary forces.

The Convention documents contained serious thinking on the problems facing Bangladesh now. They took up the chaos, lack of planning and profiteering at every level of the capitalist market and the intentional underdevelopment imposed by U.S. imperialism through its banking system, the World Trade Organization, the International Monetary Fund and the World Bank.

As with so many other countries in Asia and Africa, Bangladesh is deliberately kept underdeveloped, dependent and poor. It is used as just a source of cheap labor by U.S. and British policy and increasingly now by Indian capitalists.

The structural adjustments imposed on Bangladesh led to the forced closing of many domestic industries in order to reorient the economy to cheap labor on imported fabric that is exported as garments. These policies have made Bangladesh much poorer. One leader of the SPB stressed again and again in every conversation, “All Western ‘help’ is designed to make us helpless.”

Poverty and unequal distribution in Bangladesh have grown far worse in recent decades. Almost 80 percent of the population is still peasant. But landlessness among the peasantry has grown drastically from 20 percent landless at the time of independence in 1971 to 70 percent of the peasant population reduced to day laborers and indebted sharecroppers without land today.

In a country of 150 million people, 90 million live on the edge of starvation. Millions of workers are forced to go abroad to send home survival remittances.

The SPB explains that the country is fabulously rich in fertile land and a 12-month growing season. Yet more than half the population is seriously malnourished. Though Bangladesh has oil, gas, coal, iron and other minerals, it is denied modern technology and efficient distribution. It is capitalist chaos at its worst.

The SPB provided guests with a great deal of political information, along with an analysis of the many problems facing the country. Each analysis was infused with revolutionary optimism and determination to organize the most desperately poor workers and millions of landless peasants to step into a historic role of challenging capitalist chaos and imperialist domination.


Next, a first-hand view of the struggle in Bangladesh. 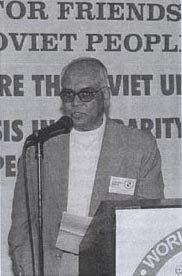 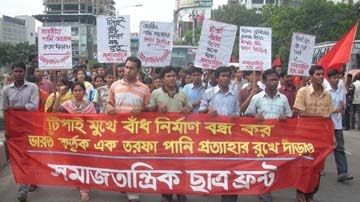 Check out our COMMUNISTS IN THE US GOVERNMENT News and Reference Site: http://www.commieblaster.com

Facts organized all in one location, including US Congressmen, Governor and Ambassador testimonies. Obama, New Party, Ayers, Dunn, Jennings, Jones, Sunstein, Jarrett, Lloyd, Wright, School Indoctrinations, Soros, Cop-Killers, Cuban Spy Rings, Commie Media, Misinformation, Congress Investigation, plus details on Socialist/Communist Members of Congress like Nancy Pelosi, Barney Frank and over 80 others. Listen to Soviet Spy defector explain how communist takeovers are performed and Reagan's guidance on dealing with Communists. Learn what a Socialist, Communist and Progressive is. Examine ACORN, SEIU's and Union Communist leaders. See FBI files and testimonies. Catch up on Takeover News and study a Communist Takeover Plan from the 1960's, along with how to resist. Videos, links, pdfs.

Commies can run, but they can't hide! - http://www.commieblaster.com