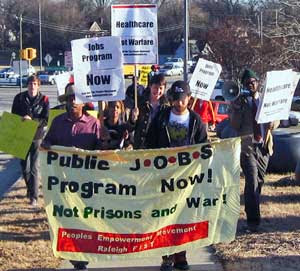 A spirited group of several dozen demonstrators, overwhelmingly youths and students, marched through downtown Raleigh, N.C., on Jan. 15, Dr. Martin Luther King Jr.’s birthday. The march began at the Walnut Terrace Community Center, progressed to City Hall and then to the Office of Economic Recovery and Investment, the state office which oversees allocation of stimulus money.
Marching for jobs, Jan. 15.

Demonstrators chanted, “A job is a right, we gotta fight, fight, fight” and, “Give us a job, stop locking us up,” reiterating the key point that all people have a right to a job.

The march, organized by the Peoples’ Empowerment Movement and Raleigh Fight Imperialism, Stand Together, demanded a city-run, federally funded jobs program that puts Raleigh’s unemployed back to work and provides for a living wage, full benefits and pensions, in line with Dr. King’s lifelong demand for full employment.

Alicia Sidney, Peoples’ Empowerment Movement organizer, told WW: “Every human being has the right to work, to provide for their family. When that right is taken away, actions must be taken. If we don’t demand fair treatment, we will be overlooked and end up worse off.”

Due to its pressure, the group was met at City Hall by Charles Meeker, Raleigh’s mayor since 2001. A formal letter had been sent in advance to both Meeker and members of the Raleigh City Council listing the specific jobs that the contingent wanted to see included in a public program. These include but are not limited to: accessible child care and after-school programs; food co-operatives in South and East Raleigh, predominantly Black areas where there are no grocery stores; public health care and mental health facilities; increased staffing at community facilities; and “green” jobs such as improved public transportation and community gardens.

The official unemployment statewide rate recently jumped to 11.2 percent, the highest during the current economic crisis. With real national unemployment above 25.1 percent for African-American workers, 24.3 percent for Latino/a workers, and 25.7 percent for youth and over 50 percent for urban youth of color, a city-run, federally funded jobs program is the only relief for this crisis. Over 27 million workers, one in five, are either unemployed or underemployed. The only way a public jobs program will be implemented is through the struggle of workers, including youth.

The writer is a Raleigh FIST organizer.
Articles copyright 1995-2010 Workers World. Verbatim copying and distribution of this entire article is permitted in any medium without royalty provided this notice is preserved.
at 2:09 AM