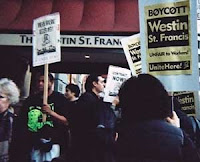 A few hundred San Francisco hotel workers, many employed at the Westin St. Francis hotel, bordering the west side of Union Square, were joined by community and universal health care activists at a picket in front of the hotel on Jan. 13.

The Westin St. Francis is one of seven upscale hotels the workers in Unite Here Local 2 are urging the public to boycott while the entire union membership continues to demand a new contract with the hotel owners. The union distributed a leaflet about the boycott at the Starwood-Corporation-operated Westin St. Francis. It stated, “This hotel earned over $11 million for its owners in the first nine months of 2009 (a ‘down’ year!).”

Regarding the big J.P. Morgan Healthcare Conference taking place inside the hotel, the union’s leaflet said: “Shame on J.P. Morgan! ... J.P. Morgan has decided to side with a corporation trying to make health care unaffordable to working people like us. ... Be part of the solution, not part of the problem. We are asking you not to patronize this hotel. Please do not attend the J.P. Morgan Healthcare Conference ... and please don’t use the Westin St. Francis until Starwood management respects the hardworking people who keep this industry going.”

More actions by the hotel workers and their allies are expected as the union fights to keep reasonable health care benefits included in a new contract.

For more information, go to www.unitehere2.org.

Articles copyright 1995-2010 Workers World. Verbatim copying and distribution of this entire article is permitted in any medium without royalty provided this notice is preserved.
at 8:37 AM