Statement from the Marxist-Leninist Party of Canada

Stephen Harper's Unacceptable Provocations and Warmongering Against the Korean People

On December 7, 2009, Prime Minister Stephen Harper addressed the south Korean National Assembly, the first Canadian Prime Minister to do so. He used the occasion to talk about building a "closer partnership" with south Korea based on "shared values" and the "intrinsic principles you have embraced. Freedom. Democracy. Free Trade. Open Markets." He also launched an unprovoked, unacceptable, anti-communist, boorish and historically false attack on the DPRK.

In his speech to the Assembly, Harper purported that Canadians' and Koreans' "most intense shared experience began nearly 60 years ago, in what we call the Korean War and you term the 6-2-5-War. The same brutal totalitarianism that imprisoned Eastern Europe behind the Iron Curtain plunged your own country into another devastating war. Koreans were pitted against each other. Only the courage of the government and the people of the free Republic of Korea, backed by the United Nations force of which Canada was a part, saved the entire Korean peninsula from enslavement...Canada and Korea have been staunch allies in the defence of freedom and democracy ever since. We are not a warlike people, but when the cause has been just and necessary, Canadians have always answered the call. They is no doubt the cause of Korean freedom was just and necessary. And, the truth of the ideals for which we fought has been revealed beyond the shadow of a doubt as this Republic has flourished, while the Communist North has floundered. Your success as a nation serves as the greatest tribute you can show to the Canadians who fought and died here and to the development assistance that Canadians contributed to Korean recovery and reconstruction..."

And further: "We are already allies in the United Nations mission to secure and rebuild Afghanistan, and in the larger struggle against international terrorism. We will also continue to stand together against the anachronistic dictatorship in the North. Canadians have great compassion for the people of North Korea and we are eager to see the day of their freedom and their reunion with their brothers and sisters in the South."

Harper's anti-communist and false rendering of historical events since World War Two in Korea shows the dangerous path Canada is on in the hands of such a government. His remarks are an assault on the values Canadians stand for rooted in the principles established following humanity's victory over fascism. They are also an assault on the dignity of the Korean people who emerged from the World War Two as victors who had contributed mightily to the defeat of the Axis powers, especially Japanese imperialism in East Asia. These courageous Koreans, lead by Kim Il Sung, founder of the Democratic People's Republic of Korea (DPRK) and the heroic Korean People's Army, defeated the Japanese but were then denied the right to reclaim and rebuild their country from the ashes of World War Two as an independent, free country. After the war, the U.S. intervened and reintroduced the Japanese to oversee the U.S. occupation of south Korea. To stymie the Korean people's nascent nation-building project they provoked the Korean War and ultimately divided Korea along the 38th parallel. The U.S. imperialists then connived to establish south Korea as a military staging ground from which they could launch imperialist wars of aggression against the Soviet Union and China during the Cold War period and to serve its aims of world domination today. This is the content of the "freedom" and "values" that Harper is talking about, that Canada, as part of Anglo-American imperialism, defended during the Korean War and is defending today by backing U.S. policy in Korea.

In speaking of the Korean War as "our most intense shared experience," Harper failed to mention that the crimes committed against the Korean people before and during the Korean War included the use of germ warfare such as anthrax which was developed in Canada and used by the U.S. military, or that the Korean War was a revolutionary civil war aimed at ousting the U.S./UN foreign occupying force and reuniting Korea as an independent nation free from outside interference. It is the height of Canadian chauvinism for Harper to suggest to the Korean people who have a five thousand year history of independence and resistance to outside invaders that "your success as a nation serves as the greatest tribute you can show to the Canadians who fought and died here..."

Canada continues to play a shameful role in diplomacy by preventing the DPRK from opening an embassy in Ottawa, nor opening a Canadian embassy in Pyongyang -- even after establishing diplomatic relations in 2001 -- so that normal diplomatic, economic, cultural relations and other bilateral arrangements can be established to foster friendly and mutually beneficial exchanges between the people of Canada and the DPRK -- which would contribute to stabilizing the political situation on the Korean peninsula and be a factor for peace in the region.

As it stands, Canadians must take responsibility for the crimes committed against the Korean people during the Korean War by the Canadian government in the service of foreign powers by ensuring that another Korean War does not break out. Canadians must demand that the government do everything it can, including the building of a Canadian embassy in Pyongyang and a DPRK embassy in Ottawa, to normalize and foster peaceful, respectful and mutually beneficial relationships with all the Korean people, north and south. The unseemly conduct of the Canadian government with respect to Korea, as evidenced by the uncouth remarks of Prime Minister Harper in Seoul, and its hostiity in diplomatic relations with the DPRK also point out the need for Canadians to take up the issue of political empowerment in earnest so that an anti-war government in Canada can be established which will duly express the desire of Canadians to be a genuine force for peace and mutually beneficial international relations in Korea and elsewhere in the world. 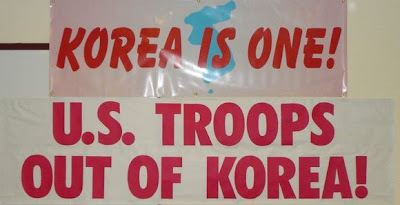 Hello thr, thanx a lot for this article ....... This is exactly what I was looking for.